Getty Ben Simmons vs. Jayson Tatum will be one of the most intriguing matchups in the Sixers-Celtics series.

The Celtics’ and Sixers’ seasons have been intertwined from the very beginning. Now, the long-time rivals will square off with a trip to the Eastern Conference finals on the line.

To say the teams have had interesting seasons would be an understatement. The fun started when the teams swapped picks just ahead of last June’s NBA Draft, with the Sixers trading up to take Markelle Fultz with the No. 1 overall pick and the Celtics taking Jayson Tatum at No. 3.

High-profile trades don’t always work out well for both teams. But that may be what happened in this case. Despite some bizarre issues with Fultz’s shooting, Philadelphia got a player it views as a key part of The Process, which featured a stretch of abysmal on-court play that led to lottery pick after lottery pick and eventually, a stacked roster that should make Philadelphia an NBA title contender in the very near future.

Celtics GM Danny Ainge told reporters last year that Boston would have taken Tatum at No. 1 anyway, making it an easy call to give up the top spot in exchange for the No. 3 pick and a future first-round pick. The team envisioned Tatum as an immediate difference-maker who would grow into a star down the road. But Tatum ended up playing an even bigger role in the team’s season than anyone initially imagined. When Gordon Hayward broke his ankle six minutes into the team’s season-opener in Cleveland, Boston had a need for a go-to forward that Tatum ended up filing ahead of schedule.

Boston, which won 16 straight early in the season and finished second in the Eastern Conference, would be among the favorites to reach the NBA Finals if the Celtics were healthy. But with Kyrie Irving out for the season following knee surgery, the Celtics needed seven games to get past the seventh-seeded Bucks in the first round. Boston has been considered a long-shot to win the East and is an underdog against the Sixers despite having home-court advantage.

Despite a fluke injury to Joel Embiid, the Sixers were the hottest team in the league down the stretch. A team-record-tying 14-game winning streak helped Philly earn the No. 3 seed in the playoffs. And with Embiid back on the floor, the team had little trouble dispatching the Heat in five games in the opening round of the playoffs, giving Philly its first postsesaon series win in six years. After missing his entire would-be rookie season last year with a broken foot, Ben Simmons has been everything the Sixers hoped they were getting when they drafted him No. 1 overall in 2016.

Robert Covington of the 76ers and Marcus Morris of the Celtics battle for a loose ball during the first half of their game at TD Garden on January 18.

Sixers-Celtics Game 1 will take place Monday night in Boston, according to Sports Media Watch, which has a full breakdown of conference semifinal schedules and TV info.

Per Sports Media Watch, here’s the full series schedule: (Game 1 is an 8 p.m. tip-off; other times are TBD.)

Game 3: Saturday, May 5, at Philadelphia. TV: ESPN or ABC

It’ll be the 19th playoff series between the two franchises — the most times any two teams have met in the postseason. Boston has won 12 of the first 18, but the teams haven’t met in the playoffs since 2012. Not a single player on either roster played in that series, which the Celtics won in 7 games. But the history of the rivalry — and the hard-core nature of both fan bases — makes the series even more intriguing.

5Dimes lists Philly as a -400 favorite to win the series. Boston is a +325 underdog. The sportsbook lists the Sixers as 2.5-point road favorites in Game 1.

We also know that oddsmakers — and computer models — have been more bullish on the Sixers than the Celtics throughout the postseason. If you’re bullish on the Celtics’ chances in the series — or in their chances of making a long playoff run, for that matter — you can get favorable odds.

Markelle Fultz and Jayson Tatum, two of the top three picks in the 2017 NBA Draft, will square off in the Eastern Conference semifinals.

Oddsmakers soured considerably on the Celtics after Irving’s injury, and they’ve been relatively high on the Sixers. Heading into Game 6 of Boston’s series against Milwaukee, the Westgate Las Vegas Superbook had Boston as an 80/1 longshot to win the NBA title, despite the Celtics being a win away from wrapping up their first-round series and having home-court advantage in the conference semis. (Whoever wins the Celtics-Sixers series would also have home-court advantage in the Eastern Conference finals if the Cavs or Pacers upset the top-seeded Raptors in the other conference semifinal.) The Sixers, by contrast, have 10/1 odds to win it all, tied with the Raptors and Cavs for the best odds among Eastern Conference teams.

On Friday morning, BetOnline had the Sixers as the favorites to win the East, and the Celtics as a massive +2500 longshot.

Home-court advantage is not to be discounted in the NBA playoffs, and the Celtics made very good use of it against Milwaukee, winning all four home games and losing all three away games. Having Tatum and Jaylen Brown on the court and the luxury of playing a hypothetical Game 7 at home absolutely gives the Celtics a chance, even with a makeshift backcourt featuring Marcus Smart, Terry Rozier and Shane Larkin. But Philadelphia has played as well as any team in the league over the past two months. The Sixers deserve to be favored in the series, and have a real shot to make it to the Finals. If they get there, they’ll likely be huge underdogs against the Rockets or Warriors. But crazy things can happen in one series. If you’re in the Finals, you have at least a puncher’s chance to win the title.

Joel Embiid and Co. will be difficult for the Celtics to slow down.

I’ve been bullish on the Celtics all year, so much so that I wasn’t all that surprised that they won 55 regular-season games without Hayward. Tatum and Brown have both demonstrated the capacity to take over games, both during the regular season and the playoffs. Seeing one or both of them go off for 30 or more in a decisive game would not be shocking. And though the lineups Brad Stevens has used this postseason aren’t exactly the ones he imagined putting on the floor a few months ago, Boston’s role players — especially Rozier and Marcus Morris — have played a lot better this postseason than people thought they would.

If Irving was on the floor, I’d be comfortable betting on a Celtics victory at even money, despite the off-the-charts talent level on the opposing roster. And even without Irving, Boston absolutely has a chance. A Celtics win in a seven-game series is not a remotely far-fetched outcome. If you’re in Vegas and you like the Celtics’ chances, you’d be perfectly justified in betting on the Celtics at that price. In fact, if I were wagering on the series, that’s what I’d do. I think a Philadelphia win is more likely than not, but I think the Sixers are at least slightly over-priced at -400.

But the Celtics didn’t have an easy time with a Bucks team that, despite the Greek Freak’s presence, has nowhere near the talent that the Sixers possess. The injury status of Brown, who missed the second half of Game 7 of the Milwaukee series with a hamstring injury, is an additional reason to be bearish on the Celtics. This series should be competitive. It should be a lot of fun to watch. And given the amount of young talent on both rosters, it could be the first of many of these series in the years to come. This time around, I think Philly has enough firepower to outlast Boston and advance to the Eastern Conference finals. 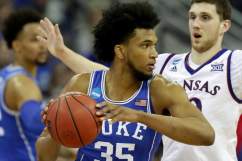 Read More
Basketball, NBA, Sports Betting
The Sixers-Celtics NBA playoff series is one of the most intriguing so far this postseason. The series odds point to a competitive series.