Getty Ettore Messina will be coaching the San Antonio Spurs after the death of Gregg Popovich's wife, Erin.

San Antonio Spurs assistant coach Ettore Messina will be filling in for head coach Gregg Popovich, who is grieving the loss of his wife of 40 years, Erin

Messina, 58, is from Italy and is considered to be one of the top coaches in the history of European basketball. He has been with the Spurs since 2014. Messina will be coaching the Spurs as they play the Golden State Warriors in Game 3 of the first round of the NBA Playoffs in San Antonio. The Spurs currently trail Golden State 2-0 in the best of seven series.

1. Messina, Who Has Filled in for Popovich in the Past, Is Considered to Be a Head Coach Prospect & Will Be Interviewing for the Hornets Job

Ettore Messina has filled in for Gregg Popovich as the Spurs’ head coach before. He coached San Antonio for two games in March 2016 while Popovich was dealing with a family medical emergency, according to The Washington Post. He led the team to a victory over the Indiana Pacers, but lost his second game, against the Minnesota Timberwolves.

“The well-oiled machine goes on,” Messina told the San Antonio Express-News after his first time filling in Popovich. “You sit at the wheel and try to steer and not mess it up. Keep the steering straight.”

““It’s always an experience, first of all because you know you have the support of Pop, which is important for all of us,. Also, you have a group of players that care.”

Messina has been rumored to be a candidate for several head coaching jobs in recent years. ESPN’s Adrian Wojnarowski reported earlier this week that Messina will be interviewing for the vacant Charlotte Hornets job. Messina has previously been linked to vacancies in Los Angeles, Sacramento, Indiana and Houston over the past few seasons. During the Lakers 2014 search, he received a major endorsement from Kobe Bryant, Wojnarowski reported, “A candidate Lakers management and Kobe Bryant share a fondness: Euro legend Ettore Messina,” but he did not land that job.

In 2016, he told the Express-News, “Look, I’m a soldier. Whatever will happen in the future, the first person I will talk to is Pop and the second is (GM) R.C. (Buford).

Messina will have the tough job of getting the Spurs to focus on Thursday night’s game, but players and team officials have said that is what Popovich would want.

“I spoke to Pop this morning,” General Manager R.C. Buford said in a statement. “He’s overwhelmed by the support. He’s very appreciative of the love that’s been shared with our group, and with him and his family and Erin’s family. As you’d expect from Pop, he wants our focus to be about the game today, about this series, and that’s what today will be about. We’ll miss Erin a lot, and the focus of our team will be on supporting Pop. But we’ve got basketball to get back to.” 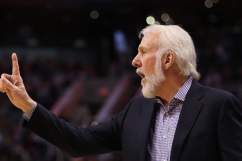 2. He Began His Coaching Career in Italy, Where Manu Ginobili Played for Him, & Later Helmed Teams in Russia & Spain

Head Coach Ettore Messina of CSKA Moscow is hoisted up by his players as they celebrate victory at the end of the Euroleague Final Four final basketball match between Maccabi Elite and CSKA Moscow, at the Palacio de Deportes on May 4, 2008.

Messina replaced Mike D’Antoni as the head coach of Benetton Treviso in the Italian League in 2002. During his three seasons there he won the Italian League championship once and the Italian Cup three times. Messina then moved on to Russia, where he coached CSKA Moscow from 2005 to 2009, winning two EuroLeague titles there. He next coached Real Madrid in Spain from 2009 to 2011. After struggles there, he spent one year in the NBA and then returned to CKSA Moscow for two seasons, his last stint in European coaching.

Popovich talked about Messina after playing his CSKA Moscow team in a preseason game prior to him joining his staff. “I’ll watch the game film closely because I’m always impressed with Coach Messina’s teams. They penetrate and pitch better than we do,” Popovich told reporters. “We try to be a team that does that really well, and we’ve adopted some European style in what we do here and there, but he really does a great job with them. I want to look at that and see what we can do to get even better at it.”

3. He First Came to the NBA in 2011 as a Consultant for the Lakers & in 2014 He Was Hired by the Spurs After a Short Stint Back in Europe

Messina spent the 2010-2011 season as a consultant for head coach Mike Brown with the Los Angeles Lakers. It was his first foray into NBA basketball and was seen as a stepping stone into an eventual head coaching job. After a brief return to Europe to coach CSKA Moscow for a second time, Messina came back to America to work for Gregg Popovich and the San Antonio Spurs. He was hired in 2014.

“He’s one of the best coaches in the world,” Popovich said about Messina., according to The Washington Post. “He’s very successful, a great technician, a great game coach. To be able to befriend him over the years and now work with him is a joy for me and really good for our organization.”

Messina has been seen as a possible replacement for Popovich.

“Many close to the Spurs – or who know the surprisingly progressive Popovich – suspect Messina ultimately is being groomed to succeed the league’s longest tenured coach,who extended his deal for another two seasons,” Sacramento Bee columnist Ailene Voisin wrote in 2014, when Messina was in the running for the Kings coaching job. “Among other things, Popovich and Messina share basketball philosophies, fine wines and international travel, and are not dissimilar personalities; Messina is a no-nonsense, disiciplinarian type who would benefit from two seasons as a lead assistant, mainly to adapt to an NBA culture in which the head coach wields far less clout than in Europe.” 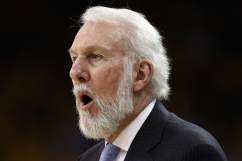 4. He Has Twice Been the Head Coach of Italy’s National Basketball Team & Is Married With a Son & Daughter

In addition to his extensive coaching experience in Europe and now with the San Antonio Spurs, Messina has also coached at the international level. He was the head coach of the Italian men’s national basketball team from 1993 to 1997, coaching the squad at EuroBasket in 1993, 1995 and 1997. His team won a silver medal at EuroBasket in 1997.

In 2016, Messina returned to the Italian national team in effort to lead the Azzurri to the 2016 Summer Olympics in Rio de Janeiro. He took a leave of absence from the Spurs to do so, coaching the Italian team in 2016 Turin FIBA World Olympic Qualifying Tournament, but they failed to qualify. He left the team in 2017.

“I played as a kid growing up in Venice, where I went to college and started coaching as well. I moved to a nearby city and eventually got my big break when Virtus Bologna, one of the top clubs in Italy, offered me an assistant coach job with the top team and head coach of the junior programs,” Messina said in an interview on the Lakers website about his coaching path. ”

Messina is married and has two children, he said in that interview.

“When we say let’s go home, we’re talking about Bologna, Italy. But with the lockout, we didn’t know when and how we were going to start the NBA season, so we decided to stay in Madrid, Spain, and leave our 7-year-old boy in school there,” he said in 2010. “I also have a 24-year-old daughter who is graduating college in Venice. Our son is going to do an exchange program for three months, which will cover most of the season with me. So that’s the good part of the shortened season. My wife and I are also excited about living close to the beach, which we have never done before. Now, I’ve lived for four years in Moscow, which is great in general, but the weather … it’s extremely cold.”

Messina is known in Europe for his “tough personality,” and that has been seen as something he would need to change if he wanted to be a NBA head coach, according to Silver Screen and Roll. The Lakers’ SB Nation site wrote that Messina’s teams, “run highly disciplined offenses relying on a heavy amount of post-ups along with man and ball movement.”

Xavier Sanchez told Forum Blue & Gold in 2011 the “big adjustment Messina will likely have a hard time making is the control of the game the coach has over its players. You call Avery Johnson the ‘little general’? You’ve seen nothing. Coaches in Europe walk the bench up and down, don’t usually sit and are giving commands to its players. He’s probably calmer than the average euro coach but I can’t see that on an NBA bench.”

But he has a philosophy similar to Popovich and has been seen as a perfect fit for San Antonio’s staff. In 2007, he wrote about the differences between European teams and NBA teams.

“The biggest adjustment American players have to make when they move to Europe is putting team goals ahead of their own goals,” he wrote in a column. “In NBA players are generally assessed by their individual performance with a lot of emphasis on individual statistics. If you managed to improve your stats by the end of the season, usually you receive a better contract regardless the result of your team. In Europe if your team wins, you’re perceived as a better player. That means individual statistics are only important combined with the team result. 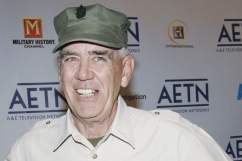