Couldn't let this one just sit in the library..

Josh Rosen has been the talk of the pre-draft process, and often for reasons unrelated to football. Josh is doing his best to dispute some of the public perception of himself as a well-off, entitled quarterback. Josh’s parents, Charles Rosen and Liz Lippincott, have quite the resumes. The couple divorced in 2012, but Josh remains close to both parents.

Josh’s father is a renowned doctor who President Barack Obama once considered for the role of surgeon general. His mother is an established journalist who served as editor for a number of notable publications. Josh gets his athleticism from his mother and father, who previously had standout careers as ice dancers. His sisters are also accomplished athletes. According to the Los Angeles Times, Beatrice played college tennis at Emory, and his younger sister, Lydia, is a standout high school rower.

Digging deeper into Josh’s family, he has ties to powerhouses like the Wharton School and J.B. Lippincott publishing house. Josh has tried to downplay his family accomplishments as he focuses on having a successful NFL career.

Learn more about the Josh’s family.

1. Josh’s Father, Charles, Is a Spine Surgeon Who Was Considered by President Obama for Surgeon General

People always ask me who my inspiration is and my answer is quick and easy….My father’s mustache

Not only is Josh’s father a successful surgeon, but was being considered by Obama for his surgeon general pick. Like his son, Charles is no stranger to controversy, and it’s a reason Josh believes he did not end up landing the position.

“But basically, he’s fought pharmaceutical companies and corruption in the medical industry his entire life,” Josh told ESPN. “He’s gone David vs Goliath time and time again and won every time. He’s a moral person who does what’s right. And, yeah, maybe he was removed from Obama’s shortlist because he’s controversial — or the titans in the industry don’t agree with him. But that’s where my charitable impulse comes from — my dad.”

Charles has tried to follow the money trail in the medical field, and it has not always made him the most popular doctor. According to the Orange County Register, he founded the Association for Ethics in Spine Surgery. Colleague Dr. Ranjan Gupta explained how Josh’s father has a long history of innovation.

“Chuck was ahead of his time,” Gupta told the Orange County Register. “He was met with a lot of resistance. People were not thrilled.”

2. Josh’s Mother, Liz, Is a Former Editor at Golfpro & Graduated From Princeton

Been keeping me in line since day one. Love you mom, didn't want you to get lost in the Mother's Day Insta mob yesterday. Happy belated Mother's Day ❤️

Like her son, Josh’s mother came from a well-established family. According to The Post Game, Liz’s father was the CEO of publishing house J.B. Lippincott & Co. Josh is named after the publisher’s founder. According to Sports Illustrated, Liz is an established journalist who is the former editor of Golfpro and Sportsstyle. In a story that sounds similar to a Greek mythology tale, Liz explained to The PostGame that she noticed her son’s arm strength before he even turned one.

“He launched his bottle,” Liz told The Post Game. “I swear it almost knocked me out.”

3. Josh Calls His Mother a Feminist & Father a Trump Supporter

Proud to call you Mom ❤️

Josh has been outspoken about his political beliefs. From wearing a “F— Trump” hat on one of the president’s signature golf courses to questioning UCLA’s apparel deal with Under Armour, Josh has touched on a number of topics away from football. There is a perception that Josh’s family leans a certain way politically, but Josh was exposed to both sides of political issues through his parents.

“My dad voted for Donald Trump and contributed to his campaign,” Josh explained to ESPN. “My mom is a strong feminist liberal. That’s how I’m learning compromise. I’m not going to be political; I’m just going to do what I believe is right, and if that happens to fall on the political spectrum, so be it. But there’s a time and a place for it. You might not want to speak against the president in the playoffs or before you have a starting job on a team and actually have a voice.”

Josh grew up Jewish, but has said he is open to different religions. Josh attended a Catholic high school where he regularly attended mass.

“That’s right [he attended mass on the weekends],” Rosen told ESPN. “I went to a Catholic school, and it was cool to learn. You have to have an open mind. It’d be naive to think you’re just born into the right religion that will get you into heaven. My opinion will evolve and grow.”

This does not mean Josh does not appreciate his Jewish roots. He noted to Sports Illustrated that his time at UCLA has allowed him to meet prominent Jews in the Los Angeles area.

“In retrospect, being Jewish is a big reason why I should have considered UCLA,” Josh explained to Sports Illustrated. “Just because of how Jewish Hollywood is, and they really want someone to look up to because they just don’t have professional athletes.”

5. Josh’s Great-Grandfather, Joseph Wharton, Is the Founder of the Wharton School at the University of Pennsylvania

Way to look at the camera everyone

Josh’s family connections are impressive, but it is something Josh has tried to downplay as he heads to the NFL. His great-grandfather Joseph Wharton founded the well-known Wharton School at the University of Pennsylvania.

Josh’s upbringing has been well-documented as the former UCLA quarterback has been highly touted since before he graduated high school. Josh has often been painted as a spoiled rich kid who has not had to work as hard as his competitors. In an interview with ESPN the Magazine, Josh admitted he wished he had not given the media such open access to his personal life.

“I’ll put it this way: These connections were discovered because I shared them,” Josh told ESPN. “That’s my naïveté in thinking, ‘I’m going to tell people who I am because that’s who I am.’ At 18, I wasn’t aware it was something to hide… I could’ve avoided it if I’d just shut my mouth. But that’s not the person I want to be.” 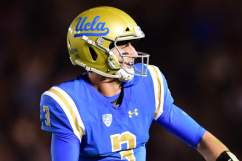 Josh Rosen & Trump: What Did QB Say About President?