Getty Shaquem Griffin is projected by many draft analyst to get selected in the third round.

Shaquem Griffin has been the story leading up to the 2018 NFL draft. Griffin has just one hand, but teams are taking notice for their draft boards based on his play on the field. Where will Griffin get drafted? The consensus seems to be Griffin will be selected in the third or fourth round.

Griffin is yet another versatile defender who can impact the passing game. Griffin can play off-the-ball linebacker and then rush the passer on third down. He has 4.38 speed which should help him make plays in coverage and as a pass-rusher, where he dominated at UCF. Over his career, he generated a pressure once every 5.8 rushes, which is better than Myles Garrett, and he toasted Auburn for 10 pressures in their bowl game. Pass-rush grade is quite stable from college to pro (0.69 correlation coefficient), which makes us confident that Griffin will continue to produce. In light of the horrific details of the felony charges levied against Reuben Foster, Griffin’s ability to make plays at linebacker will be even more valuable.

USA Today’s Luke Easterling has the Jaguars selecting Griffin with the No. 93 pick in the third round. Easterling calls Griffin one of the “best defensive prospects” in this draft class.

But with many draft analysts and projections still putting him in the Day 3 range as nothing more than a likely special teams stud at the next level, a closer look at his athletic ability and game tape shows a player capable of making a much more significant impact on Sundays…Both on film and in athletic testing, Griffin has proven himself to be one of the best defensive prospects in this year’s draft class…Will Griffin’s nonstop motor make him a stud on special teams? Absolutely. But his skill set, mentality and leadership skills should allow him to earn a much bigger role on every other down. If a team manages to get all that he brings to the table with nothing more than a Day 3 pick, they’ll be getting one of this year’s best bargains of the entire draft weekend.

Bleacher Report’s Matt Miller noted we are in unprecedented territory with Griffin, making it difficult to predict where a team will select him.

“On the field, he’s one of the best defenders in college football,” Miller writes. “Griffin, who has played safety and linebacker, flies around the field making plays. In the Peach Bowl against Auburn, he made play after play. Nothing like this has come up in my time covering the NFL draft, and there’s no precedent for how teams will assess Griffin’s situation.”

While there is a chance Griffin could sneak into the second round, it appears the third round is Griffin’s sweet spot to get selected. The NFL invited Griffin to the draft, and he will be attending the event in Arlington. Griffins draft stock has risen based on his performance during the pre-draft process. He performed well during Senior Bowl week in Mobile, then dominated the combine. Griffin ran a 4.38 40 yard dash, the fastest ever recorded for a linebacker. Griffin also notched 20 bench press reps. In an interview with The Today Show, Griffin noted he wanted to be known for his play on the field rather than having one hand.

“I don’t words like [handicapped],” Griffin told the Today Show (via Orlando Sentinel). “I can do anything anybody else can do…I’m going to put all [the discussion about having one hand] to rest. One day they’re going to talk about Shaquem Griffin the football player, not Shaquem Griffin the one-handed wonder.”

Griffin will likely start out as a special teams monster, and play on defense in sub-packages. If his time at UCF is any indication, the more a team sees of Griffin, the more he will find the field. Griffin offers a team some position versatility. During Senior Bowl practices, Griffin lined up as defensive end, linebacker and safety. 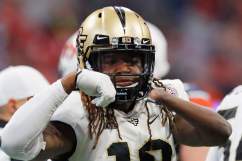 Read More
Football, NFL, NFL Draft
Where will Shaquem Griffin get drafted? We take a look at the latest NFL mock drafts, projections and predictions for when Griffin will hear his name called.