Tony Finau comes from a large family, and has a big family of his own. Tony grew up with six siblings including his brother Gipper Finau, who he learned to play golf with. Tony and his wife Alayna Finau have four children of their own. Tony is Tongan and Samoan, the first to play on the PGA Tour, and his father Kelepi “Gary” Finau grew up on the island of Tonga.

According to Golf Channel, Kelepi immigrated to the United States when he was 12, and eventually met his wife Ravena when he was 23. The couple moved to Utah where Kelepi would eventually learn the game of golf to teach his sons Tony and Gipper how to play.

“This is the sport that we used to talk about like, if you ever see me at a golf course, shoot me,” Kelepi told ESPN. “Why would anybody go chase a little white ball into a hole? So we stayed far away. We thought playing golf was like going to your grave.”

Now, his son is on the PGA Tour thanks to years of sacrifice and dedication.

Learn more about the Finau family.

1. Tony’s Father, Kelepi, Turned Their Garage into a Driving Range For His Sons to Practice

According to Golf Channel, Tony’s father Kelepi worked graveyard shifts for Delta, meaning the family was on a limited budget. When Gipper asked to play golf, Kelepi began to do the math, and realized it was going to be a pricey endeavor. Kelepi became resourceful by purchasing used equipment, and turning their garage into a makeshift golf practice center.

The Golf Channel detailed how Kelepi taught his sons to play golf.

So Kelepi stopped by the local Salvation Army and bought a 6-iron for 75 cents, a putter for $1 and a little red bag for 50 cents. At the library, he checked out magazines, videos and golf books about the swing, none more influential than Jack Nicklaus’ “Golf My Way.”

With no choice but to take advantage of the free part of the course, Kelepi directed his boys toward the short-game area, where they spent hours chipping and putting. To work on their full swing, he built his own driving range, in the family’s garage outside their cramped, three-bedroom duplex. The boys smacked balls off scraps of carpet into a nylon net. Behind the net was a mattress dotted with spray paint – targets to hit from about 5 feet away, so they could work on their trajectory and starting lines. Kelepi scoured garage sales for a cheap camcorder and taped their swings. When the boys went to bed, he cued up the footage and compared their actions with what he had seen in the magazines, videos and books. He was learning, too.

2. Tony Is the First Tongan & Samoan Athlete to Compete on the PGA Tour

The sacrifice of Tony’s family along with his hours of practice paid off. According to the Deseret News, Tony became the first Tongan and Samoan golfer to compete on the PGA Tour. Tony is also Mormon, and admits he brings a sense of pride to the golf course.

“It’s really an honor for me to represent my people at the level that I am,” Tony told the Deseret News. “I think the Polynesian people and the gospel are in harmony. We’re very respectful people, and very humble people … and I try and let that shine through as much as possible.”

Tony grew up in Salt Lake City where he learned to play golf, despite his initial skepticism of the sport.

“Golf in the Polynesian culture was just so out of the zone,” Tony told ESPN. “Nobody plays golf. Everybody thought only girls or old rich white men play that sport.”

"Life doesn't come with a manual, it comes with a mother." I'm grateful for my mother on this day. Every step I've taken in life whether backwards or forwards she is right there with me cheering me on. I love and miss you mom. Happy Heavenly Mothers day! Until we meet again. #imissyourhugs?

Kelepi may have been the one who taught Tony how to play golf, but it was Tony’s mother Vena who came up with the idea.

“This is her project,” Kelepi told PGA.com. “I feel like mothers and wives are smart when it comes to this kind of thing. Otherwise, I would’ve had them playing football.”

According to PGA.com, Vena tragically died in a car accident in 2011. Tony detailed the accident in an article he wrote for Golf Digest.

On Nov. 27, 2011, we learned my mom had died in a car accident. One of my brothers and a sister were in the same car and were injured. My mom referred to herself as “Mom da bomb” because she was the center of our family. All of us were heartbroken. My brother and sister were moved to a hospital in Salt Lake where, a day later, on Nov. 28, my girlfriend, Alayna–we’ve since gotten married–gave birth to our son, Jraice, in another part of the hospital. Talk about a range of emotions.

Tony’s mother played a huge role in her son’s early years learning golf. According to Golf Channel, Tony and his mother slept in a car during a PGA Junior Series event in Milwaukee as they could not afford a hotel room. With just a few dollars for Tony to eat McDonald’s hamburgers, Ravena did not eat for three days. Tony has noted his mother’s favorite color is green, which he was reminded of as he played in his first Masters, where green is the iconic color of the tournament.

4. Tony Is Married to Alayna & the Couple Has 4 Children Together

GettyTony Finau pictured with his family at Augusta during the 2018 Par 3 Tournament.

Tony is married to Alayna, and the couple has four children together: Jraice (6), Leilene Aiaga (5), Tony (3) and Sage (1). Family is Tony’s biggest priority, and the golfer once missed a chance to golf with Tiger Woods as he awaited the birth of their fourth child. According to Deseret News, he also almost missed a Pro-Am event before a local company allowed him to use a private plane to make the event.

“That’s a memory that I really appreciate because he stayed with me the whole time,” Alayna told Deseret News. “He’s a really good dad that makes a lot of time for all of us. Not just the kids, but for me, too.”

Sometimes Tony’s wife and kids travel with him on tour, but often times they stay home given the young ages of the kids.

“I think the biggest challenge when I’m on the road is being away from my family,” Tony explained to the Deseret News. “I always had parents who were there for me, and they would … teach me the basic principles of the gospel, really through example more than anything else. I don’t have as much time with my children as I’d like.”

According to Golf Digest, their youngest son Sage was diagnosed with Congenital Cystic Adenomatoid Malformation. Golf Digest describes the condition as a “lung lesion appearing as a cyst or lump in the chest that can vary in size and could lead to cancer if not removed.”

GettyJabari Parker is one of Tony Finau’s cousins.

Tony is not the only athlete in the family as he is second cousins with Milwaukee Bucks player Jabari Parker. Jabari tries to keep a low profile, and not take away any attention from his cousin. Jabari’s mother, Lola Parker, spoke with Golf.com about her son’s relationship with Tony.

“Jabari wouldn’t want to come out here and be recognized and be in Tony’s spotlight,” Lola told Golf.com. “So he tries to stay in the background. He likes golf. I hear he’s even learning to play golf. But if he watches Tony he is very quiet about it. He went to the U.S. Open and watched him for two days, and Tony didn’t even know he was there.” 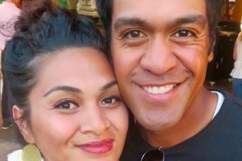