Things not only got heated between the Rockets and Warriors on the court, but between the two fan bases after the game. A video emerged after Game 5 showing a Rockets fan talking trash to Steph Curry’s wife, Ayesha Curry, along with the Curry family after Houston took a 3-2 lead.

“Ayesha, we gonna beat you at home. It’s Houston’s time,” the fan can be heard saying in the video. Ayesha approaches the man, but the video cuts off before Ayesha starts talking.

Ayesha took to Twitter to tell her side of the story, noting the fan bumped her “pregnant belly.”

The fact that you have the audacity to post this after this man bumped me in my 8 month pregnant belly asking and I quote “doesn’t losing feel like getting punched in the gut?” And continued to follow me and taunt me with his camera is beyond me…but “This is America” right. ??

In a later tweet, Ayesha admitted to removing a cigarette from the man’s mouth, and noted the fan continued to harass her.

I thought it was an accident at first because it was crowded and then he made that gut comment and continued to follow me. I should’ve got him in the face instead of saving his life by removing the cigarette he was swinging around in my face. ?? Wish there was full footage

According to the Houston Chronicle, the fan has been identified as Jose G. Camargo, and denied bumping Ayesha’s stomach. Jose also noted he did not know Ayesha was pregnant. Camargo posted a lengthy response to Ayesha using an Apple note posted on Twitter, where he claimed Ayesha threw a cigarette in his face.

I never bumped you. I never touched you. I turned around and saw a group of Golden State Warriors fans (that happened to be your in-laws). I made a comment: ‘We are going to Oracle and give them that knockout blow to the gut’ that I immediately apologized to Poppa Curry and yourself once I saw you were pregnant, but the comment was never made towards you. I meant the team. I didn’t know you were pregnant. I don’t keep up with the Currys, but then your reaction towards me even after I apologized is what got the camera rolling. Play the video. Even the end of it when you said you have the audacity to talk s— to a pregnant woman, I was trying to apologize. Even after you took my cigarette and threw it in my face. I could’ve reacted differently, but I stayed in my lane. I never touched you. I never bumped you. It’s playoff basketball. Emotions are high. That was it. Again, never did I know you were pregnant nor that it was y’all til after the initial comment!

Ayesha is eight months pregnant with the couple’s third child. The new baby will join Riley Curry (5) and Ryan Curry (2). For the Warriors, it is win or go home in Game 6 as the Rockets lead the series 3-2. 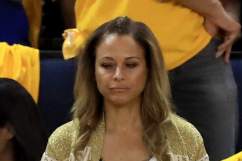