Bob Baffert has come a long way since working with horses on his family’s farm near the Mexican border. Bob’s wife, Jill Baffert, has been with him as her husband emerged as one of the top trainers in horse racing. Bob won a Triple Crown with American Pharoah in 2015, and has another opportunity to do so with Justify.

For Jill, her life is a long way away from her dreams to be a television anchor, a role she enjoyed prior to meeting Bob. According to the Columbia Daily Herald, Jill has battled Legg-Calve-Perthes, and had hip surgery after American Pharoah’s Triple Crown run. The Columbia Daily Herald detailed the health condition.

Jill tackled a lifelong health problem of her own after winning the Triple Crown. She underwent a hip replacement earlier this month after suffering from Legg-Calve-Perthes since childhood. The disease occurs when blood supply is temporarily interrupted to the ball part of the hip joint. Without sufficient blood flow, the bone begins to die, so it breaks easily and heals poorly.

According to the Los Angeles Times, Bob’s family initially just kept cattle and raised chickens on their farm. Bob’s father bought a few inexpensive quarter horses, and it was Bob’s introduction into horse racing.

“There was nothing racing about us,” Bob explained to the Los Angeles Times. “I never learned from a real trainer so it was trial and error. Mostly error. All of a sudden, I started winning races. I was the king of Arizona.”

Now, Bob is much more than the king of Arizona racing, and his wife, Jill, along with their son, Bode, have been there the whole way.

1. Jill Worked as a Waitress as She Pursued Her Dream of Becoming a TV anchor

Like her husband, Jill knows what it is like to work hard for your dream. According to the Columbia Daily Herald, Jill worked nine years as a waitres at Breece’s Cafe in Centerville, Tennessee. She continued to work there even after accepting a television job in Hopkinsville, Kentucky after graduating from Middle Tennessee State University.

“I was doing everything in Hopkinsville, reporting, anchoring and producing,” Jill told the Columbia Daily Herald. “I was a waitress to make extra money, not as much as when I was in high school and college, but whenever I could. I was driven and determined to make it in television, but I kept coming back to Centerville every chance I got…I made my own money, bought my own clothes and met hundreds of wonderful people. It was great experience.”

2. Bob Met Jill While She Was Hosting a TV Show Leading up to the 1998 Kentucky Derby

GettyBob and Jill Baffert at the 2010 Belmont.

Jill’s life would take a turn after she met Bob. The couple initially met in 1998 when Jill was hosting a Louisville morning TV show leading up to the Kentucky Derby. Jill admits to not being a horse enthusiast when the couple first started dating.

“Horses were never even on my radar,” Jill told the Columbia Daily Herald. “My sister could tell you everything you wanted to know. Not me.”

Jill’s affinity for horses would grow as she started dating Bob. Now, she could not imagine her life without being near a barn, but it is a big shift away from television.

“I was really driven and ambitious,” Jill explained to the Columbia Daily Herald. “I was dedicated to my job. Looking back now, my life took such an incredible detour from broadcasting. I love these horses and the people in the horse business. Bob’s friends and my friends mostly are in the horse business. Our life resolves around horses.”

3. The Couple Have a Son, Bode, Together

The couple has one child together, their 13-year-old son Bode who can be seen at all the major horse races with his family. After American Pharoah won the 2015 Triple Crown, Bode let the world in on his meteorology dream. The Washington Post captured the exchange in the 2015 Belmont post-race press conference.

For Bode Baffert, the son of Bob Baffert who trained American Pharoah, dad’s winning the triple crown was nice. But the 10-year-old has his eyes set on a bigger prize: becoming a meteorologist.

During his father’s victory-crowning press conference at the Belmont Stakes, Bode sat next to his jubilant father with a blank expression the entire time. Towards the end of his remarks, dad tries to engage Bode.

“What was the best part of all three races?,” dad asks.

“Winning them,” Bode says matter-of-factly before turning away and looking down at the floor.

“[Laughs] He is all his mother Jill, unbelievable,” dad responds. “But he says he doesn’t want to be a horse trainer.”

“Meteorologist,” Bode replies without any hesitation, nearly cracking a smile.

“It’s a lot easier on the body,” dad concludes, laughing.

American Pharoah now lives at Ashford Stud, a farm outside Versailles, Kentucky. According to WDRB, it is about a 60-mile drive from Churchill Downs. The horse holds a special place in the hearts of Jill and Bob. They still visit the horse, and bring him organic carrots as a treat.

“Everything he does is great,” Bob explained to WDRB. “He could race. He’s intelligent. I could bring him out here and people could pet him. He loves people. I’ve never seen a horse like that. They say at the farm, he’s the same way. He goes and he gets them all in foal. He’s great at whatever he does. They say that when he makes a left to go to the stud barn, he knows. He gets on his toes and knows he’s going to work. When he makes a right and goes to see the public, he’s quiet. He knows.”

5. Bob Was Previously Married to Sherry Baffert & the Couple Has 4 Children

Bob Baffert with Jill Baffert and their son, Bode.

Bob was once married to Sherry Baffert, and the couple were separated in 1999 per the Baltimore Sun. The couple have four children together: Savannah, Taylor, Forest and Canyon. Sherry was critical of Bob’s constant desire to work in a book published in the late 90’s.

“Now, it’s seven days a week, and stress, and traveling all the time,” Sherry notes (via The Baltimore Sun). “He never takes a day off. I ask him, `Are you happy? You’ve reached the top. You’ve achieved what you wanted. Has it made you happy?’ ”

According to The Orange County Register, Bob had a heart attack in 2012 in Dubai, and caused him to have surgery for three stents. The experience has admittedly changed the trainer’s perspective on life.

“I’m older and wiser now,” Bob told The Orange County Register. “I’m in my Peyton Manning stage. I want to really enjoy this. I’ve done a lot. I’ve won some Derbys. I’ve won every race imaginable. But before I used to think it was just me, that I was the one doing this. But it’s not just me.” 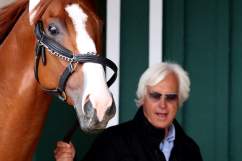