Diego Maradona looked a much more reserved figure during Argentina’s second round World Cup match with France in Kazan. The legendary No. 10 sat quietly with his wife, Rocio Oliva, during the first half of the game. France took an early lead when Marcos Rojo brought down Mbappe in the box resulting in a penalty for Antoine Griezmann. Though Argentina equalized before half-time with an outstanding long range strike from Angel Di Maria. This was Maradona’s reaction:

That reaction is vastly different to his behavior during Argentina’s dramatic win over Nigeria in their final match of the group stages:

Numerous tabloids had reported in the run-up to the France match that soccer’s governing body, FIFA, had warned Maradona to tone down his behavior:

When Mercado gave Argentina a 2-1 lead at the start of the second half, Maradona’s intensity began to ramp up slightly:

Maradona was forced to deny reports that he had been hospitalized following his eccentric behavior at the Nigeria match. The legend told the media he was “very much alive” and that paramedics had been treating him for a neck issue. Maradona said, via ESPN, “I’m perfect, I’ve never been petter. I was shocked that [reports suggested] that there had been a stretcher, an ambulance. Nothing happened… We were all together, the Telesur team and my team, and we could not believe how social networks started to make a big lie, which made no sense, go viral like that.”

GettyMaradona during the France match.

Maradona said in the same interview that he was also in Russia to see his grandson, Benjamin. Maradona’s daughter, Gianinna, was previously married Argentina and Manchester City striker Sergio Aguero. Maradona said, “I saw Benjamin. I greeted him and we are going to see each other. His father [Aguero] and his family have given their disposition so that he can come here and spend two days with me at my hotel.”

In the wake of Maradona’s behavior, the Guardian offered their take on his antics with a piece titled, “Diego Maradona lives like he played, with blatant disregard for the rules and norms.” 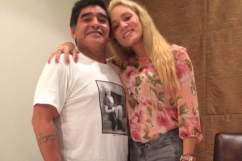