Getty The Lakers are expected to make a hard push to sign LeBron James.

As LeBron James is in the fight of his life against the Warriors in the NBA finals, James’ impending free agency sits in the distance. We’re taking a look at some of the teams that could be in contention to sign James this summer. We explored the Sixers, and now we’ll take a look at the Lakers. Los Angeles may be the one place that could potentially offer James a mix of what he is looking for both on and off the court.

The Lakers will have about $61.8 million in cap space per Spotrac, which puts them in the running to sign two max players. Los Angeles used the trade deadline to create enough space to put them in striking distance of two great players. To truly sign two players to max deals, the Lakers would likely need to create a bit more space. James teaming up with Paul George in L.A. has been a rumor dating back to last summer. ESPN’s Adrian Wojnarowski reported that the Lakers plan continues to be to pair James and George together.

The bigger question is the details of James’ plan. So far, James has been mostly silent on his off-season plans, only saying that his family and winning will be the two biggest criteria he looks at. The Ringer’s Kevin O’Connor breaks down what the league thinks James will prioritize, and why the Lakers could meet all his demands.

Several possible factors in LeBron’s decision-making process have been raised by league sources: a place to raise his family; a place where he will have the best shot at winning more championships; a place where he can begin setting up his post-playing career and dip into the world of entertainment and team ownership. The Lakers, more than any other team in the league, sit at the nexus of all the reasons LeBron would want to join a franchise.

According to Trulia, James purchased a $23 million Los Angeles home in December 2017. It marks the second L.A. home James owns, both in the Brentwood neighborhood. The reality is many pro athletes own multiple homes, and rarely does that seem to impact their free agency decision. However, James owning two homes in Los Angeles shows it is a place he and his family enjoy. If James’ family is going to be the top priority this summer, Los Angeles makes a lot of sense.

On the court, the Lakers roster is a work in progress. Lonzo Ball, Brandon Ingram and Kyle Kuzma are all part of the Lakers young core. For all his conflicts with Papa Ball, James has been complimentary of Lonzo Ball’s game, even grabbing a front-row seat to watch him play summer league.

Julius Randle had a solid season, but the restricted free agent would likely be a casualty if James along with another star come to L.A. The Lakers most valuable card they can play is their cap space, allowing James to hand-pick a free agent he would like to play with, or save the room for next year’s class. Even without another max player, the Lakers current roster with the addition of James is arguably more talented than the one he is working with in Cleveland.

James and his longtime friends started the production company SpringHill Entertainment. Times have changed since Shaquille O’Neal bolted Orlando for Los Angeles, in part, to help his entertainment career. The internet has leveled the playing field so players like Russell Westbrook can be a star in Oklahoma City. That said, Los Angeles is still the center of the entertainment universe, a business James is very interested in. ESPN’s Pablo Torre wrote a lengthy piece in 2017 about James’ business and entertainment aspirations, noting James spends time every off-season in Los Angeles going over potential movie roles.

Consider this excerpt from Torre’s piece where James admits to wanting to star in a superhero movie.

Today, James has committed to sitting down each offseason in LA — where he bought a mansion two years ago — and reviewing offers for his next movie role. And the offers are coming. But in Cleveland, I ask the man who’s lived as both an idol and a villain, and knows the thin line between the two, if at some point he might want to be what every blockbuster-starved producer is truly craving. A role that Carter knows can be the most lucrative in modern entertainment. A role that, given the prospect of sequels and action figures and amusement park rides, is akin to failure insurance.

James grins, catching the drift, perhaps mentally fitting himself into the costume already — a costume that, for once, would not require the padding of fake Hollywood rubber muscles.

“I love comedy,” LeBron replies. “But I’ve always wanted to be a superhero.”

There will be other free agent destinations with more talented rosters than the Lakers, but only James knows how much his other aspirations will play into his decision. If James’ family and life after basketball are high priorities, the Lakers can make a pretty compelling case for why he should sign on the dotted line. 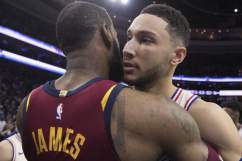