LeBron James wears lots of titles, but he has been open about his role as a father being his most important job. LeBron and his wife, Savannah James, have three children: LeBron Jr. (13), Bryce (10) and Zhuri (3). While their kids have all the resources needed to succeed, Savannah and LeBron have been adamant about the high standard that is held for their kids.

“They’re not rewarded for mediocrity,” Savannah told Essence. “I believe that my kids can do anything they put their minds to,” she said before adding, “We are just normal people from Northeast Ohio. You can look at it as a very good thing because maybe we don’t understand what we could be. But to me, that’s much more stressful — it takes much more energy rather than just being yourself. And I feel like that’s definitely rubbed off on our kids.”

LeBron’s oldest son, LeBron Jr., is already garnering national attention for his play on the court. LeBron has been outspoken about his desire for his children to be able to still be kids, despite living in the spotlight that comes with having a celebrity father.

LeBron and Savannah’s children’s ages range from toddler to teenager. Their youngest daughter, Zhuri, is 3 years old, while LeBron Jr. is 13. Bryce is the middle child at 10 years old. LeBron has made it a point for his family to be a priority. LeBron does not have a relationship with his dad, and wanted a different life for his family.

“Just breaking the mode, that’s all,” LeBron explained to Cleveland.com. “I wanted to be a part of the statistics that breaks the mode of fathers running out on their kids. That was something that I obviously went through and I knew from Day 1 that wasn’t going to be me. So, to have a family and be there for them and be there on a day-to-day basis is important. I know I travel a lot but I’m a staple in the household and it means a lot to me and I know it means a lot to my kids.”

LeBron has also called Gloria James his mother and father. LeBron credits his father’s absence for motivating him to succeed, and for helping him make his own family a priority.

LeBron’s oldest son, LeBron Jr., has turned out to be quite a baller. ESPN reported LeBron Jr. already has offers from Duke and Kentucky. LeBron spoke publicly back in 2015 about how he felt his son was too young to be recruited.

“Yeah, he’s already got some offers from colleges, it’s pretty crazy,” LeBron told CBS Detroit. “It should be a violation, you shouldn’t be recruiting 10-year-old kids. It’s crazy, he plays just like I did. He has great awareness and he’d rather pass first and set guys up. Most kids nowadays just want to score.”

3. LeBron Admits to Wanting to Play in the NBA With LeBron Jr.

There is some speculation LeBron would try to extend his NBA career to play with his son. Unless the NBA changed the rule to allow players to enter the league directly out of high school, James would likely have to play another six seasons to play with his son. In an interview with GQ, LeBron admitted he would love to play on the same court as LeBron Jr.

Ever wondered how @KingJames makes those crazy shots?

With the Cavs facing elimination in the 2018 Eastern Conference Finals down 3-2, LeBron scored 46 points in Game 6 against the Celtics, including a couple surprising shots. After the game, LeBron’s middle child, Bryce, had a simple question for his father.

“How do you make all those crazy shots?” Bryce was caught on the above video asking his father.

LeBron’s achievements on the court even take his own family members by surprise. LeBron’s nine NBA finals appearances ties him for the fourth most in NBA history. LeBron has made a remarkable eight straight NBA finals. After LeBron hit the 30,000 career points milestone, his wife and kids recorded a video to congratulate him.

5. The Couple Found Out About Their 1st Child When Savannah Was in High School

The couple’s first child came as a bit of a surprise. Savannah was still in high school when they found out she was pregnant with LeBron Jr. Savannah was five months pregnant when the couple went to her prom, and James was an NBA rookie.

“If I think about it now, it looked terrible,” Savannah explained to Harper Bazaar. “A halter top with a mermaid bottom and rhinestones. It was cute at the time.”

Savannah admitted she was worried about what her parents would think along with her public perception. She wanted to keep the baby, and LeBron encouraged her that their life would go on as normal.

“No. That was not an option for me [not to keep the baby],” Savannah noted to Harper Bazaar. “Even if it would have been my mom’s advice, I would have fought it to the end. That was clearly not the case [to try to trap LeBron]. I had a good group of friends around me, so I didn’t let those things get to me. If I did, I would have been running home crying every day.”

Founded in 2004, the LeBron James Family Foundation’s mission is to positively affect the lives of children and young adults through education and co-curricular educational initiatives. Recognizing the life-changing importance of education, the foundation invests its time, resources and attention in the kids of James’ hometown in Akron, Ohio. Through its Wheels for Education and Akron I PROMISE Network programs, the foundation serves more than 1,100 Akron-area students by providing them with the programs, support and mentors they need for success in school and beyond.

The James family has launched several different initiatives, including I Promise which is a partnership with Akron to create a new school. LeBron spoke to The Undefeated about why the foundation decided to get involved in the school system.

“This school is so important to me because our vision is to create a place for the kids in Akron who need it most — those that could fall through the cracks if we don’t do something,” LeBron explained to The Undefeated. “We’ve learned over the years what works and what motivates them, and now we can bring all of that together in one place, along with the right resources and experts. If we get to them early enough, we can hopefully keep them on the right track to a bigger and brighter future for themselves and their families.” 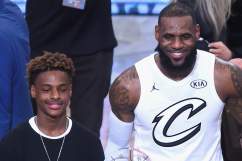