Luka Doncic’s mother, Mirjam Poterbin, has been with her son every step of the way on his journey to the NBA. Doncic may be one of the most accomplished basketball players in Europe, but he is a relative unknown to many American sports fans. Doncic is originally from Ljubljana, Slovenia, but moved to Madrid, Spain to play pro basketball for Real Madrid. As for the NBA attention Doncic received while still playing in Europe, Doncic tried not to get too far ahead.

“Some of them write ‘Tank for Luka,'” Donic explained to ESPN. “I don’t know. I just laugh…You never know what can happen in the future. I want to concentrate on where I am.”

Where he is is about to change as Luka heads to the NBA, but there is no doubt his connection with his mom will remain the same. Poterbin spoke about their relationship in an interview with Euro Hoops.

“I have a great relationship with Luka,” Poterbin told Euro Hoops. “Even though he is 18 years old, he is making his own decisions, by himself. I’m just here whenever he needs me. We talk sometimes but in the end he makes his own decisions, and I have to say that, until today, he has made all the right decisions. Our relationship is very good because he has his own life, I have my own life, but we help each other as much as we can.”

There was some speculation Doncic would miss attending the draft as he was playing in Europe, but Doncic was able to attend. According to ESPN, Doncic was planning to attend the draft with his mom, mother’s boyfriend and grandmother all in New York for the festivities.

1. Luka’s Mom Was a Dancer & Former Model Who Now Operates a Beauty Shop

With my champion ???❤️ myson#mypride#my?

Doncic comes from athletic genes. According to SLAM, his mother was a former hurdler and dancer, while his father played pro basketball in Europe. Poterbin believes that what makes her son a special player is his ability to stay present in the moment, and put all his efforts into the current game.

“That’s what’s really good with Luka,” Poterbin told SLAM. “He’s here. He doesn’t think about the next game. He’s thinking about the game today. Also in his life he’s like this. He’s not thinking about what might happen or how it’s going to be.”

In addition to her experience playing sports, Poterbin was also a model, and now runs a beauty shop.

2. Luka’s Mother Calls Her Son’s Move to Real Madrid the “Toughest Decision I Had to Make”

When Doncic was just 13 he moved from Slovenia to Spain to be part of Real Madrid’s basketball program. It was a decision that took a while for both Doncic and Poterbin to consider. Ultimately, they believed it was best for his own development, even though it would mean Doncic would be apart from his family.

“Of course it was difficult,” Poterbin explained to Euro Hoops. “It was the toughest decision I had to make in my life and Luka’s life. It was not easy, as he left home at 13 years of age, alone, without family, without friends, to go to a city where he didn’t know anyone. Almost nobody was speaking English and so it was really tough on him. Sometimes I realize this and I say, ‘Oh my God, thank God he got past this period. It’s over.”

3. Luka’s Parents Split Up When He Was 8 & His Father Was a Pro Basketball Player in Europe

According to ESPN, Doncic grew up going to games in Ljubljana where his father, Sasa Doncic, played pro basketball for the top club. Doncic would be the ball boy, and mop the floor during his father’s games. His parents split up when Doncic was just eight years old, and his mother became his primary caretaker.

Doncic has not commented publicly about his relationship with his father. ESPN reported Sasa Doncic is now a coach for a Slovenian club. After his son’s strong showing during the 2017 EuroLeague season, the elder Doncic spoke to Mundo Deportivo about his son’s progression.

“It has not surprised me, at all. Luka has had a great season at Real Madrid, has come to the selection with great enthusiasm and has found a very healthy environment,” Sasa Doncic explained to Mundo Deportivo (translated). “Goran Dragic helps him a lot, as well as the coach Igor Kokoskov, who is doing a great job. Take the selection with authority. ”

4. Luka Lives With His Mother in Madrid

According to ESPN, Doncic and his mother live in a gated community in Madrid. When Doncic is not on the basketball court, he enjoys playing video games like many people his age (19) .

“He is very mature because of his life — to go away so early,” Poterbin explained to ESPN. “But when he’s at home, he’s a teenager.”

Near the sofa, there’s a desk with an ergonomic chair designed for gaming. Doncic says he spends two to three hours a day playing video games like FIFA and Overwatch. (“Most of the time, when I get home … I see Luka playing,”[former teammate] Willy Hernangomez says.)

Doncic’s mother moved to Madrid to be there to support her son.

“My life did not change so much,” Poterbin explained to Euro Hoops. “After Luka was living alone, in residence with other kids in Madrid, I moved to Madrid two years ago because he needed the support, the help, so I would say that my life changed a little bit because of this, but not too much. I’m here with my son and this is what’s most important to me. I can help him in any way, and that’s what matters.”

5. Mirjam Believes Her Son Was “Born to Play Basketball” 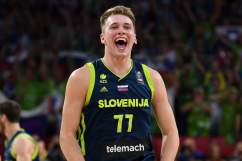