Luke Heimlich is one of college baseball’s top prospects. The left-handed ace has racked up 34 wins and only seven losses throughout his collegiate career at Oregon State, one of the premier baseball schools in the nation. Despite scouting evaluations projecting him as Major League talent, it remains to be seen if any Major League Baseball team will sign him. With the 2018 MLB Draft in the rearview mirror, Heimlich has, for the second year in a row, gone undrafted — entirely due to off-field issues.

In 2012, Heimlich, then 16, pleaded guilty to one felony molestation charge. Although he has since completed the terms of his plea deal and is no longer registered as a sex offender, his juvenile conviction has clouded, and potentially eliminated, his future as a Major League player.

Here’s what you need to know about Luke Heimlich:

1. In 2012, Heimlich Pleaded Guilty to Molesting His Niece

Oregon State ace Luke Heimlich: 'Fans can cheer me. They can boo.'

He is at the College World Series a year after it was disclosed he had pleaded guilty to sexually abusing a young relative when he was 15.

Pierce County, Washington prosecutors brought charges on Heimlich in March 2012, shortly after his sixteenth birthday. The victim, the daughter of one of his older brothers, relayed to investigators that Heimlich brought her into his bedroom and pulled down her underwear. Then, according to court records first reported by The Oregonian, he “touched her on both the inside and outside of the spot she uses to go to the bathroom.” The six-year-old girl asked him to stop, but he refused.

The described incident, which took place between September and December 2011 when Heimlich was 15, was one of two prosecutors charged Heimlich for. The victim also said Heimlich first touched her inappropriately when she was four, between September 2009 and September 2010. Heimlich was 13 at the time of earlier incident. The charges were filled after Heimlich’s brother questioned his daughter about the second incident in 2011.

Heimlich reached a plea deal the day before his niece was set to testify. In exchange for pleading guilty to one count of molestation, the prosecution dismissed the earlier incident. Heimlich admitted his guilt in a letter submitted to the court. “I admit that I had sexual contact,” he wrote.

He didn’t serve any time for his admitted crime. Instead, he received a suspended 40 week sentence at Washington’s Juvenile Rehabilitation center, two years of probation, and two years of bi-weekly sex offender classes. He had to register as a Level 1 sex offender for five years, a category for those deemed to be low-risk for repeat offenses. Heimlich finished his probation in June 2014, which lined up almost exactly with when he moved to Corvallis to attend and play baseball for Oregon State. His case was sealed in August 2017, five years after his guilty plea.

When Heimlich moved to Oregon, three years remained on his requirement to register as a sex offender. According to an interview with Sports Illustrated, Heimlich visited the Corvallis Police Department on September 23 to register. As an off-campus student, Heimlich wasn’t mandated to relay felony convictions to school officials. Rather, the process involves state police passing the information to Oregon State once it’s logged. Since Heimlich was a student athlete, the athletic department was supposed to receive record of his sex offender status.

“As far as what I needed to do, I needed to tell Benton County and then they send the information to the university,” Heimlich told Sports Illustrated.

However, Oregon State officials were not notified of Heimlich’s sex offender status until March 2016, 18 months after Heimlich registered at the police department. Whoever assisted Heimlich in filling out his paperwork, they forgot to take his fingerprints. Without fingerprints, he couldn’t legally be added to Oregon’s sex offender registry. A series of unreturned phone calls and undeliverable mail led to the extended delay on processing Heimlich into the system correctly.

3. He Has Since Denied any Wrongdoing

Despite pleading guilty to the crime, Heimlich has maintained his innocence both publicly and privately. He explained his reasoning for taking the plea deal to Sports Illustrated:

“I had several conversations with my mom, with my dad, and ultimately it came down to: We thought that this was going to be the best route for me and my family, knowing that it was basically a he-said/she-said. In the court of law we didn’t really think I stood a fair chance; that was the advice we had been given. So we thought that pleading guilty was going to give me the best chance at a normal life, and our family a best chance at reconnecting and being able to just kind of move past this whole event.”

If Heimlich hadn’t taken the plea deal and had been found guilty, he could’ve faced at least five years in a juvenile detention center. On top of his belief that the trial might not end well for him, he didn’t want to put his niece through rigorous legal proceedings.

Heimlich has the support of his mother and father, Meridee and Mark Heimlich, who helped him make the decision to plead guilty in order to move on with his life. “I pled guilty to it,” he told Sports Illustrated. ”But ever since that day and even before that, in court records and everything, I’ve denied ever committing the offense. I stand by that.”

Heimlich repeated his innocence to the New York Times. “Nothing ever happened,” he said.

The girl’s mother confirmed that Heimlich denied the crime even during the court proceedings, though due to the level of detail of her daughter’s accusation, she believes her. “There’s no way he didn’t do it,” she told the New York Times. Heimlich’s brother, the girl’s father, has never made a public statement about the case. He has majority custody of his daughter following the couple’s divorce in 2009. The brothers have had minimal contact since Heimlich’s guilty plea.

Before the start of the 2017 College World Series, and shortly after his conviction went public, Heimlich announced he was leaving the team. Oregon State, sparked by Heimlich’s masterful pitching, had a 54-4 record and the number one overall seed entering the collegiate tournament. He had recently been named the 2017 Pac-12 Pitcher of the Year.

“I’m sad to say I am not joining them, because doing so would only create further distraction for my teammates, more turmoil for my family, and given the high profile of the national championship, direct even more unwanted attention to an innocent young girl,” Heimlich said.

In response to Heimlich’s decision, Oregon State University President Ed Ray released a statement of his own, which concluded: “If Luke wishes to do so, I support him continuing his education at Oregon State and rejoining the baseball team next season.”

The statements came a day after the 2017 MLB Draft concluded. Although eligible for the draft and initially projected as a potential first round pick, Heimlich went undrafted. The timing of Heimlich’s past becoming public gave MLB front offices no time to exercise due diligence on the situation.

5. The Baltimore Orioles Almost Signed Him in 2017 & Then Heimlich Returned to Oregon State

Congratulations to Luke Heimlich, who has just been named the National Pitcher of the Year by the College Baseball Foundation. #GoBeavs pic.twitter.com/z0KyP2Go8O

Despite going undrafted, the Baltimore Orioles had conversations with Heimlich about signing him as an undrafted free agent, according to a recent Yahoo! Sports report. Although a contract never came to fruition, it likely showed Heimlich that there was a chance he could still play ball at the next level.

In February, Heimlich returned to Oregon State’s baseball team for his senior season, much to the dismay of activists and sexual assault survivors. One of the detractors was Brenda Tracy, an activist who told police she was raped by four men, three of whom were Oregon State college football players, in 1998.

I don’t think athletes with sexually violent histories and criminal/felony records should get to play sports. Period.

If you have a problem with that then you are the problem.

As for why Heimlich was allowed to rejoin the team despite Oregon State’s reported belief in taking sexual assault cases seriously, Tracy said: “Because he’s a great pitcher, and they’re winning.”

All MLB teams, once again, passed on Heimlich in the 2018 draft. With Heimlich’s college playing days nearing an end, it remains to be seen if he will play professional baseball in any capacity — whether that be in an MLB organization or elsewhere.

According to MLB columnist Jeff Passan, “…on the off-chance that the handful of teams with Luke Heimlich on their draft boards opt against selecting him, the chance that he goes unsigned is basically zero.” 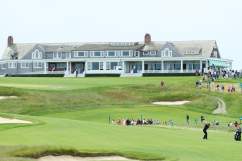 Shinnecock Hills US Open History: What Was the Winning Score at Past Tournaments?