Horse jockey Mike E. Smith is not married, nor does he have a girlfriend that the public knows about. Smith is a relatively private person who doesn’t often share details of his personal life with the public.

Smith, who was born in New Mexico and started riding when he was 11 years old, is one of the most successful jockeys of all time. He was married to Patrice Lively, daughter of John Lively, for 14 years. He went on to date fellow horse jockey, Chantal Sutherland. Although the two seemed to have staying power, they split in 2010.

Smith does not have any children.

He & Patrice Lively Divorced in the 90s

In the 80s, Smith was married to Patrice Lively, the daughter of well-known horse jockey, John Lively.

“I met Patrice when I rode at Hot Springs (Oaklawn Park in Arkansas), and we started going out. Everybody gave both John and me a hard time. They still do. When he came here to ride the other day, everybody was calling him ‘Daddy.’ Because of her father, Patrice knows a lot about racing, and she likes to horseback ride. But she never wanted to be a jockey,” Smith told the Chicago Tribune back in 1987.

Smith and Patrice Lively were married for 14 years before they decided to go their separate ways. The two never had children together and Smith never remarried.

In the 00s, Smith was romantically linked to fellow horse jockey, Chantal Sutherland. The two had a very fun, flirty relationship from the moment they met.

“Mike said to me, ‘You know, Chantal, I just don’t think that girls should be jockeys,'” Sutherland said during a scene in the reality TV show Jockeys.

“I didn’t say that I don’t think girls should be jockeys. I just said that I don’t think you should be a jockey, you being pretty,” Smith replied. The two seemed to have a bumpy relationship that involved a few break-ups along the way, and at one point, they were even engaged.

Smith and Sutherland ended their relationship in 2010, just a couple of weeks before they were set to compete against one another. The reason for their split may have been a disagreement on starting a family.

“After a while [the plot of Jockeys] became about, ‘Does she want to race, or does she want to have kids?’ And it was able to show, from a woman’s standpoint, what we have to give up to have children. A lot of women could really relate to me. To have kids, we have to give up the sport. But guys, they just keep going. And I said on the show, ‘I wish (Smith) could have the kids. I want to keep working,'” Sutherland told The Star in July 2010. 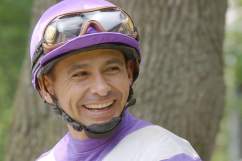 Read More
Horse Racing, Relationships
Mike E. Smith is not married, nor does he have any children. He was previously married to Patrice Lively and dated Chantal Sutherland.