There’s no cure for missing draft season quite like looking ahead to the 2019 NBA draft. At the top, R.J. Barrett and Nassir Little have the early lead as possibilities for the No. 1 pick. Zion Williamson will also be in the mix, but his positional fit at the NBA is unclear early on.

The 2019 draft class has been widely panned as one of the weaker classes, but there is still talent to be had. The majority of the top players will get a year in college to improve their draft stock. There has been some question as to how high Barrett’s NBA ceiling can be, but if Barrett proves to be a consistent shooter those questions will likely go away. No question there will be lots of NBA scouts and media members at Duke games this year with the potential NBA talent on the floor.

The annual Duke and North Carolina rivalry matchups have an added plot twist this college basketball season with Little and Barrett jockeying for draft position. The two already squared off at the McDonald’s All-American Game with Little getting the win and MVP award. Barrett has garnered a lot of the attention for this draft class, but Little is another versatile wing with freakish athletic ability.

There is still plenty of time for movement up and down the board, but this exercise can give fans a general sense of projected prospects heading into 2019. The draft order is based on the 2019 NBA championship odds courtesy of OddsShark. Teams with the worst odds are picking atop the draft, while the favorites are at the bottom. We’ve also taken into consideration picks owed to teams per Real GM’s Keith Smith. The Kings pick that could potentially go to the Celtics is protected if it is the No. 1 selection. 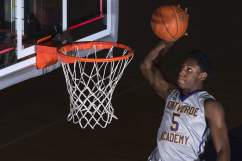