Ronaldo sent David De Gea the wrong way to give Portugal the lead. Running at Nacho in the Spanish box, Ronaldo fell over his Real Madrid teammate’s leg in what looked to be a clear penalty. Manchester United goalkeeper David De Gea attempted to put Ronaldo off by getting in his before the kick was taken. To no avail as Ronaldo sent it to the right side of the net.

The goal represents Ronaldo’s 82nd at international level and his fourth in the World Cup overall. The coolness that Ronaldo demonstrated in dispatching the penalty is especially cool considering he’s just been fined $20 million by the Spanish government for tax related offenses. The former Manchester United player has been also been sentenced to two years in prison which he will not serve because he’s a first time offender. 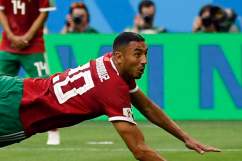