Getty Serena Williams has withdrawn from the French Open because of an arm injury.

Serena Williams has withdrawn from the French Open just before her scheduled fourth round match against Maria Sharapova. Williams told reporters at a news conference that she had suffered an injury and was unable to play. Williams, 36, was playing in her first grand slam tournament since the 2017 Australian Open, after being on maternity leave. Williams said she has a pectoral muscle injury.

“Unfortunately I’m having some issues with my pec muscle. Right now I can’t actually serve so it’s kind of hard to play,”she said at the news conference. Williams said she is planning to have an MRI scan on Tuesday, which should provide more information about the seriousness of the injury. Williams also is not sure when she will be able to return to action, leaving her Wimbledon status in doubt with just a month before the next slam begins. Her Monday match against Sharapova was highly anticipated. The victory advances Sharpaova to the quarterfinals.

“It’s very difficult. I love playing Maria. I’ve made every sacrifice I could. I made a commitment to myself and my team that if I wasn’t at least 60% I wouldn’t play. I’ve never felt this in my life. It’s so painful,” Williams told reporters. “I’m beyond disappointed. I gave up so much from time with my daughter & time with my family all for this moment. So it’s really difficult to be in this situation.”

Williams told reporters she played her women’s doubles match with her sister, Venus Williams, on Sunday, in an effort to test how well she could play through the pectoral muscle injury. She told reporters, “I thought it was a perfect opportunity to see how I was going. I tried a lot of different tapings and support. It didn’t get a lot better.”

The pectoral muscles are “each of the four large paired muscles that cover the front of the rib cage and serve to draw the forelimbs toward the chest.” Williams said she first started feeling pain during her third-round singles victory over 11th-seeded Julia Goerges on Saturday. “It was really painful and I didn’t know what it was,” she told reporters.

Williams, who has won 23 Grand Slam singles titles, had returned to play in March after the birth of her daughter. She said she will consult with doctors before deciding what to do next. She said it is the first time she has had to withdraw from a major tournament because of an injury. She also said the injury to her chest muscle is not one she has had before. She said she doesn’t “really know how to manage it yet,” and said she feels “clueless as to what to do.”

Williams hadn’t played in a Grand Slam tournament in 16 months, after giving birth to her daughter last September. She had attempted a comeback for the Australian Open, but was not in shape to compete.

“I can only take solace in the fact that I’m going to continue to get better,” Williams told reporters. She added, “The fact that I physically can’t serve at all is a good indication that maybe I should just go back to the drawing board and stay positive and try to get better and not get it to a point where it could be a lot worse.” 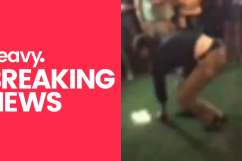