Nine three-pointers. Steph Curry broke an NBA Finals record on June 3, 2018 in Game 2 against the Cleveland Cavaliers with an amazing nine three-point shots. You can videos of the three-pointers below. The performance sparked talk that Curry was in position to be series MVP depending if the Warriors win it all. Here’s a compilation:

Here are some other views of the amazing three-point shots:

Steph Curry showed off his range to beat the halftime buzzer in the #KiaTopPlay of the night! #DubNation pic.twitter.com/wN5WOqqY1p

One Curry three-point shot occurred as he was falling backwards. You can watch other videos of some of his three-point shots in this article. Those reacting on Twitter heaped praise on Steph Curry. “Steph Curry hits his ninth three pointer and sets a new finals record for three pointers made. There’s no better and more competent guy to do it than Steph. Mvp level performance tonight,” wrote one fan. Here’s some of the reaction:

Stephen Curry has hit a playoff career-high nine three-pointers (9-of-17 3FG) and has a game-high 33 points.

Curry’s performance helped the Golden State Warriors stay in the series lead. Ray Allen previously held the record for NBA Finals three-points with eight. “Any time you’re mentioned with those kinds of names, it’s very special,” Curry told a reporter after the game. Here’s the Steph Curry three-pointer that tied that record:

Steph Curry Falling Down And Hitting His Eighth Three Pointer Tying Ray Allen For The Most In A Playoff Game. Degree Of Difficulty On The Shot: 100 #MVP #DubNation pic.twitter.com/oiinUesn1o

Steph Curry hit a three-pointer as the clock ran out.

As one journalist wrote on Twitter, “Then Steph Curry creates another three-pointer moving without the ball. Give this man his respect.” Another tweeted, “Steph Curry sets another Finals record with his 9th made three pointer in a game. Going to be the Finals MVP. A masterclass in absurd shooting, off ball movement and shot creation.”

Then Steph Curry creates another three-pointer moving without the ball. Give this man his respect pic.twitter.com/t0V4nRxcw7

Whereas J.R. Smith’s gaffe was the talk of game 1, Steph Curry owned game 2. Wrote one fan: “Before Steph Curry, the two best three point shooters I ever watched were Reggie Miller and Ray Allen (having not been old enough to watch Larry Bird). Steph is the greatest shooter I’ve ever seen.” As with Smith, Curry found himself the subject of jokes on Twitter. They were favorable to him, though:

LeBron James looking at Steph Curry after the Cavs and the Warriors game. pic.twitter.com/EbSbfqp3lH

Some people imagined the reaction of Cavaliers fans to the Steph Curry three-point shots:

Here are the reactions from some other fans:

“Steph Curry is one of the greatest shooters we have ever witnessed. Wow.”

“It must be truly demoralizing trying to block a player who can basically take two back steps from anywhere and make it!”

A night to remember for the best shooter in NBA history ever. #StephCurry pic.twitter.com/1RETZQf0sZ

“Michael Jordan, Shaq, Allen Iverson, Kevin Garnett and Steph Curry have changed the game the most in the last 30 years.”

“@StephenCurry30 OMG bruh! You are the best shooter i have ever seen. Love your game and most of all your Faith and proud of it. Game 2 Please stand up!!!”

“Steph Curry seems to choose his reaction emotions at random. Open 2pt off an offensive rebound to go ahead by 9: “WHOO!!! I’M A MANIAC!!” Off-balance 3pt to seal the game: ‘this is boring, and I’m pretty tired.'”

“Kevin Love’s not going to be able to guard Steph Curry in Cleveland, in Golden State, on the moon, anywhere…” 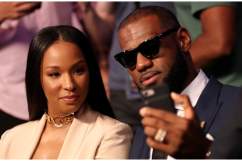