Alex Bregman is not married and does not currently have a girlfriend, according to Who’s Dated Who. It is believed that the Houston Astros infielder broke up with his girlfriend, Hannah Cormier, sometime in late 2016 or early 2017. The two had been dating for an unknown amount of time, and parted ways for unknown reasons.

Bregman didn’t announce his split from Cormier, who is a dancer for the Los Angeles Clippers. The two have not posted any photos together in well over a year, however, leading many to believe that they are no longer an item.

Additionally, Bregman talked to Us Weekly in late 2017 just before the wedding of his pal Justin Verlander, and mentioned asking Verlander’s bride, Kate Upton, to hook him up with any single friends she may have had.

“I was just asking Kate when we clinched to go to the World Series, ‘Hey can you hook me up with one of your friends or something?'” Bregman told Us Weekly back in November. He also told the outlet that he had plans to date around during the off season, to “see if it’s going to work or not,” before heading back to work. Bregman doesn’t have too much free time during the season with baseball games several nights per week.

Bregman’s Instagram page has been free of pictures featuring women, save for his mom, Jackie, and his sister, Jessica, who joined him on the field following the Astros’ 2017 World Series win. You can check out that post, which Bregman posted in March, below.

Here’s to another great year with family, friends, smiles and wins! 2018… the year or the stro! #B2B

Bregman has been spending the past few months completely focused on his career. The Houston Astros are the top team in the AL West, and are in second place in the American League overall (behind the Boston Red Sox). Bregman’s Instagram has been filled with pictures of his teammates and other baseball-related things, perhaps reemphasizing that he is indeed single.

Cormier has photos of Bregman on her Instagram account from when they dated in 2016. The fact that she didn’t delete the pictures suggests that her split from Bregman was amicable. It doesn’t appear as though she is dating anyone at this time either, judging by the absence of boyfriend pictures on her account. 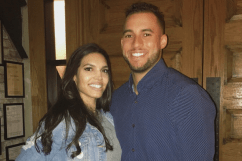