When sending a happy 30th anniversary video to my parents..Instagram vs Reality ?..love you mom & dad!! @janetgretzky

Dustin Johnson’s fiancee and kids appeared in a sweet Instagram video this week. While Johnson’s fiancee, Paulina Gretzky, is known for posting super hot bikini photos on her social media accounts, this post was much different.

Gretzky was trying to make a video with her two young children to send to her parents, Wayne and Janet, who are celebrating their 30th wedding anniversary. Trying to get her two kids, Tatum and River, to cooperate was a task in and of itself.

“When sending a happy 30th anniversary video to my parents..Instagram vs Reality…love you mom & dad!!” Gretzky captioned the post, tagging her mom in the video. Although Gretzky’s two toddlers were bouncing all over the place, grandma Janet was simply thrilled by the effort. She commented on the video, admitting that she watched the video several times.

“OMG!!!! I keep watching this. I love you all sooooo much it hurts. Thank you,” Janet wrote in the comments.

The video was much appreciated by Gretzky and Johnson fans, who often don’t get to see posts about the couple’s children. The two rarely share pictures and/or videos of their kids, and try to shield them from the public eye as much as they can. In fact, the last photo that Gretzy shared of her sun was back in June 2017. Johnson shared one from Halloween last year, but hasn’t shared any photos or videos of his children since then.

Despite not appearing much on social media, Gretzky and Johnson’s kids have made appearances at the golf course. Johnson enjoys sharing his passion with his family and really seems to love having them with him whenever it’s possible. In fact, when he won the U.S. Open in 2016 — on Father’s Day — his fiancee and son were on-hand to congratulate him at the 18th hole.

In the video below, you can watch Johnson talk about just how special that Father’s Day was for him.

“The best Father’s Day memory would have been last year at the U.S. Open. Having Tatum there on 18 when I won…that would be the best Father’s Day I could ever have. It’s a day, a special day. … For me, I would love my children… I’d love to be able to pass on golf to them. Hopefully they’ll want to play. Obviously, I would never force them to do anything. But, hopefully, both my sons would like to play golf. I think golf is a great game. It teaches you all about life. It teaches you everything you need to know,” Johnson said. 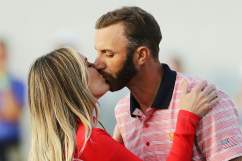