Fans watching the World Cup from home may have heard Mexico fans’ chant surrounding their new hero, Hirving “Chucky” Lozano. The chant goes to the tune of the White Stripes “Seven Nation Army” song, as the supporters simply yell “El Chucky Lozano” in unison. The supporters can typically be heard on the broadcast as the Mexico national team enters the field with their opponent. The 18’s Connor Fleming explains how Mexico has taken a played-out song, and given it new life thanks to the chant.

The riff on “Seven Nation Army” is good, but it’s not so good that it should set the barometer for stadium energy levels at every major international tournament for the rest of time. So credit to Mexico supporters, who’ve been sensational throughout the competition, for turning the slapper into a banger with this homage to el Chucky Lozano.

Lozano has been one of the many bright spots for Mexico during the World Cup. His play has transfer rumors heating up, connecting him with big-time international clubs like Barcelona. Why does Lozano go by the name “Chucky”? Lozano enjoys scaring his teammates whenever it is possible, and the other players started to call him “Chucky” after the scary doll from the horror movies. FIFA explains how the Chucky nickname came about.

Hirving Lozano may not bear any physical resemblance to a small, evil, red-headed doll, but he still goes by the nickname ‘Chucky’.

He earned the moniker for a rather more innocent form of torment than his namesake after joining the youth academy of Mexican club Pachuca as an 11 year old. There, he not only stood out because of his exceptional footballing ability, but also because of his custom of hiding under unsuspecting team-mates’ beds at night and scaring them before they went to sleep.

Mexico manager Juan Carlos Osorio spoke with ESPN about why Lozano’s game is so dangerous for opponents.

“Now that I look at Lozano playing, it is very rewarding to me because I remember two years ago when we were first starting to bring him into the team, I got a lot of stick for it,” Osorio told ESPN. “A lot of people used to say that he was just a player with great speed, but he’s very direct, and I kept saying that he has great potential. Along with speed, he had other characteristics, other things he can improve, and we started working on them, and he got a chance here and there, and little by little he started improving. [Lozano] added goals to his game, his finishing got better, and now he can slow the game down. … Now he stops the game, and he’s capable of faking, dribbling and picking a pass, so I think now that Hirving is a more complete player.”

Lozano currently plays for the Dutch club PSV, and has tried to downplay transfer rumors as the striker wants to focus on the World Cup. Lozano will likely have a decision to make on his future once the World Cup ends. 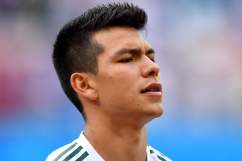