Kylian Mbappe has not only been one of the best players competing at the World Cup, he is donating his entire salary to charity. According to L’Equipe, Mbappe, who is just 19 years old, plans to donate his World Cup earnings to the charity Premiers de Cordée, “which offers sports introductions for hospitalized children and disability awareness campaigns for schools and businesses.” How much money will Mbappe be donating to charity?

According to Sports Illustrated, Mbappe earns an estimated £17,000 per World Cup match, which equates to $22,475.19. Heading into the quarterfinals, Mbappe had played in four matches which equals almost $90,000 that will be donated to charity, plus at least an additional $22,475 regardless of the outcome of France’s quarterfinal match with Uruguay. If France was to win the World Cup, Mbappe would earn a $350,404.20 bonus. L’Equipe explains how Mbappe came to the decision to donate his World Cup salary.

After consulting with his entourage, Mbappé considers that it is not necessary for him to be paid when he evolves in blue and that his premiums can serve associative or humanitarian causes. Especially since they are very much lower than what players perceive in club. ‘When playing a World Cup, it’s a pleasure, because it’s a dream come true…So yes, there is money at stake. But I do not care! I do not play for that!’

Mbappe currently plays for Paris Saint-Germain in France. Mbappe’s PSG salary is much higher than what he makes at the World Cup. According to Total Sportek, Mbappe makes about $350,844.30 per week at PSG.

In addition to giving back, Mbappe has had quite the tournament, and has been a big reason for France’s success. According to The New Yorker, Mbappe is the second youngest player at the World Cup, and is one of only four teenagers (including Pele) who has scored a World Cup goal. Heading into the quarterfinals, Mbappe was tied for fourth in goals scored with three. One of the things that has stood out about Mbappe’s game is his speed on the field. The New Yorker describes how Mbappe’s speed gives his game the “it” factor.

The greatest soccer players all seem to have this ability to alter your perception of time. I’m speaking metaphorically and mystically here, of course, but that’s what it feels like to watch them: think of the way, when Lionel Messi touches the ball, the game radically slows down, or the way, when Cristiano Ronaldo touches it, it skips a beat. My favorite thing about watching old videos of Pelé is the way he seems to roll time around with the ball, luring defenders into a slowed-down otherworld and then leaving them there while he rides the next light beam toward the goal. Mbappé, who joined Pelé today as one of only four teen-agers ever to score at the World Cup, is the second-youngest player at the tournament, and still unfinished. Already, though, he has that quality of temporal magic; the ball finds him and the lights in your head do the stretchy hyperspace thing that the stars outside the windows of the Millennium Falcon do.

Fans without a team at the 2018 World Cup may find themselves rooting for France as the more games Mbappe plays, more money will be donated to charity. 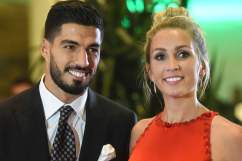 Read More
France, Soccer, World Cup 2018
France's Kylian Mbappe is donating his World Cup salary to charity. Find out how much money Mbappe will be donating, and the name of the charity he has picked.