Getty The Lakers are thought to be one of the contenders to sign Carmelo Anthony once he becomes a free agent.

Rumors continue to link Carmelo Anthony to Los Angeles, which would give the Lakers roster a bit of a boost. Just days after the Oklahoma City Thunder announced they had re-signed Paul George, news broke that the team is attempting to reach a buyout agreement with Anthony. Once the move is completed and Anthony clears waivers, he will become an unrestricted free agent.

ESPN’s Adrian Wojnarowski reported the Lakers, Rockets and Heat are the top contenders to sign Anthony. Heat Hoops’ Albert Nahmad explained it will likely be a short-term deal on whatever team he decides to play with.

Lakers, Rockets and Heat are expected to have interest in Carmelo Anthony, per @wojespn. All have roughly same amount to offer – anywhere from $2.4M minimum salary to around $5M, which in turn could be the range of a potential buyout with OKC if he were to have mutual interest.

While it is just a rumor at this point, let’s take a look at what the Lakers roster and projected starting lineup would look like if Anthony headed to Los Angeles.

The signing of Anthony would mean the Lakers would have some difficult decisions to make when it comes to their lineup. Los Angeles could opt to bring Anthony off the bench as they continue to develop Brandon Ingram. The Lakers could also go small, shifting Kuzma to the five, Anthony to the four, James at the three, Ingram at the two and Ball running point.

It is worth noting that all three contenders for Anthony are part of the “Banana Boat” crew, i.e. all three teams have some of Anthony’s closest friends in the league. Dwyane Wade plays for the Heat, Chris Paul is with the Rockets and James is now with the Lakers. Yahoo Sports’ Jordan Schultz reported the Lakers are high on Anthony’s list.

“Source close to Carmelo Anthony says the #Lakers are one of Melo’s preferred destinations, and that he’s high on chance to finally play with #LeBron. Keep in mind too, that Carmelo owns a house in LA,” Schultz tweeted.

Back in 2016, Anthony told The New York Daily News he would take a pay cut to play with James. He also explained their long-term plan to Bleacher Report.

King James has also expressed interest in playing with Anthony. In the same 2016 Bleacher Report interview, he admitted he wanted it to happen too.

“I really hope that, before our career is over, we can all play together,” James explained to Bleacher Report in 2016. “At least one, maybe one or two seasons—me, Melo, D-Wade, CP—we can get a year in. I would actually take a pay cut to do that.”

Times have changed in the last two years, and Anthony’s fit in a changing NBA is not entirely clear. The Thunder acquired him hoping they could form their own “Big Three” with Paul and George. Oklahoma City is now in the process of reaching a buyout agreement after Anthony failed to live up to his sizable contract. A good portion of the decision to part ways with Anthony had to do with the ever-increasing tax bill the Thunder were accumulating after re-signing George.

Anthony is a ball-dominant player, but could help shoulder the load offensively with James if he was willing to come to Los Angeles on a reduced role. It remains to be seen what the Lakers next move will be, as they could opt to develop Kuzma and Ingram for another season by giving them as many minutes as possible.

So far, the Lakers have shown a willingness to bring in veterans, even if it means it could cost their young players minutes. The decision is clear if James wants to play with Anthony, but we will see if James is still hoping to team up with Anthony at his current state.

Anthony was still able to put up solid numbers last season with the Thunder, while having a positive plus/minus of 3.5. Anthony averaged 16.2 points, 5.8 rebounds while shooting 35.7 percent from three last season in OKC. Anthony is a lot more appealing on a one-year, team friendly deal than his nearly $28 million salary he was projected to earn next season. 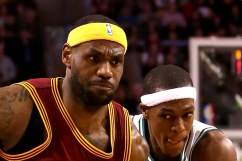