What were LaVar Ball’s thoughts on LeBron James coming to Los Angeles? Ball has been oddly silent since the big announcement, choosing instead to promote an upcoming event in Atlanta with his sons.

Atlanta, Georgia come out this Tuesday at 5:00 PM as @melod1p Ball of the Los Angeles Ballers will be playing the Dallas Ballers @ Infinite Energy Center. Me @zo2_ and @liangeloball can’t wait to meet you at the @bigballerbrand POP UP SHOP. Tickets at https://t.co/ELYjB81adY pic.twitter.com/5Sg4nEIPyF

LaVar may be quiet now, but the eldest Ball predicted LeBron would come to the Lakers back in January.

While this is unlikely LeBron’s thought process, it is the second time LaVar has called his own shot. LaVar also predicted his son Lonzo would end up on the Lakers, even before the 2017 NBA lottery took place. While LaVar may have correctly predicted LeBron would join the Lakers, we are not too far removed from LeBron taking exception to LaVar talking publicly about his parenting.

“You got LeBron — it’s going to be hard for his kids because they are going to look at them like, ‘You got to be just like your dad,'” LaVar said on Chris Broussard’s podcast in 2017 per SB Nation. “And after a while, that pressure starts sitting on you like, ‘Why do I got to be just like him? What can’t I just be me?’ And then they are going to be like, ‘Aw, you’re soft. You’re not that good.’ Because the expectation is very, very high.”

This prompted LeBron to issue a warning to LaVar to stop talking about his family. Given this happened over a year ago, maybe the two can patch things up.

While LeBron may have been critical of his father, LeBron has had nothing but good things to say about Lonzo’s game. After a December 2017 Cavs matchup with the Lakers, LeBron spoke at length about Lonzo’s game, per Bleacher Report.

It’s always team. Passes the ball. Pushes the ball up the floor. Someone that you want to play with. I don’t see the reaction because I don’t get involved in it. I don’t do it to get a reaction. I do it because [Lonzo’s] said over and over since he was growing up who he modeled his game after. Who was his favorite player. It was me. I was humbled by that. Me wishing him happy birthday was kind of the salute back to him. I see all the stupid noise that happens. I can’t buy a place in L.A. I can’t live in L.A. It’s funny noise. But I don’t get involved in it. When I post things, I don’t look at the comments. I’m so far removed from the white noise and the noise it doesn’t matter.

Yahoo Sports Shams Charania reported that Lonzo Ball has a torn meniscus, but is expected to be ready for training camp. Barring a trade, Lonzo will be teaming up with LeBron this upcoming season. Lonzo tweeted out his excitement as soon as news broke that LeBron would be joining him in Los Angeles.

“Y’all really thought he was gonna pass up the greatest city in the world… #TheKingIsHere ?,” Lonzo tweeted. 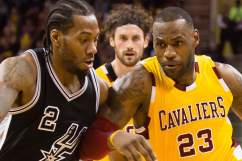