Maya Lowe is the girlfriend of professional golfer Xander Schauffele. She has been traveling the globe with him as he competes for glory in the world of golf. He is currently in a three-way tie for first place at the British Open.

Lowe and Schauffele have been dating for a few years now. Lowe recently graduated from the University of California San Diego, and is currently furthering her education at the University of Maryland University College. She is of Japanese descent and speaks the language fluently.

1. She Has Traveled to Various Courses to Support Her Boyfriend Over the Years

Enjoyed this last week exploring Okinawa with @maya_lowe. Off to Tokyo next.??

Lowe is a huge supporter of her boyfriend’s golf career and often travels with him to watch him play and cheer him on.

She and Schauffele have been dating since 2014 — at least, that’s when they first went Instagram official. It is believed that the two met in San Diego, as Schauffele attended San Diego State University and Lowe studied at the University of California, San Diego.

The two have been a very big part of each other’s lives over the years.

In 2017, after winning The Greenbrier Classic, Schauffele kissed his trophy and joked, “Usually, I only kiss my girlfriend.”

2. She Is Currently Studying for Her Master’s Degree

“Prepare for a successful future by earning a degree online at University of Maryland University College. UMUC is a respected and accredited public state university that specializes in high-demand academic programs that are convenient for busy professionals,” reads the school’s website. The university has more than 140 classroom and service locations all over the world.

According to her LinkedIn page, she is slated to graduate with a master’s degree in Health Care Administration/Management in 2019.

“The healthcare administration curriculum features emerging topics in the field. Our faculty lend their extensive field experience, and we build in opportunities for you to network with employers through your coursework,” reads the description of the Healthcare Administration master’s degree.

3. She Currently Works for Planned Parenthood

According to LinkedIn, Lowe currently serves as “Center Manager Flex” for Planned Parenthood of the Pacific Southwest. She has held the position, which is based in San Diego, California, since December 2017.

Before taking this position, Lowe served as the patient flow coordinator for the company. She has been working for Planned Parenthood since 2015.

4. She Caddied for Schauffele During the Par 3 at Augusta National Back in April

Glad to have this one on the bag for the Par 3 contest ?

Lowe caddied for Schauffele at Augusta’s Par 3 back in April.

“Schauffele made four birdies and was contending for the lead until his shot at No. 8 hit the front bank and trickled back into the water. ‘Just being here, being on the grounds, seeing the fans, this Par-3 Contest, the whole experience has been really cool and really special,’ Schauffele said,” according to the San Diego Union-Tribune.

“Glad to have this one on the bag for the Par 3 contest,” Schauffele captioned an Instagram pic taken at the event.

Lowe commented on the photo herself, making a joke about not getting paid to do the job.

“Where’s my cut?” she joked, following up with a kissy face emoji.

5. She Has Done Quite a bit of Volunteer Work

Lowe has dedicated quite a bit of her time to doing volunteer work.

In 2014, she was a Campus Ambassador for the Peace Corps. According to LinkedIn, she “Promoted the mission of Peace Corps to student body organizations at San Diego State University through presentations and social media outlets.”

During that same time period, Lowe volunteered as an operations intern for Project Concern International, a nonprofit organization based in San Diego.

She also did volunteer work for Planned Parenthood in the human resources department from July 14 through May 2015. 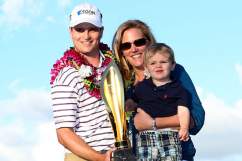