Bobby Bruce became one of the fan favorites on the latest season of Last Chance U, but it has been a roller coaster ride since the Netflix show quit filming. There are spoilers ahead, so please stop reading here if you do not want to know part of the ending for Season 3.

At the end of Season 3, Last Chance U noted Bruce had been arrested for his alleged involvement in an armed robbery, and was not expected to return to Independence. At the end of July, Heavy provided an update on Bruce’s status and what appeared to be a happy ending. We found out through social media that Bruce was on his way back to Independence, and it looked like Bruce would once again be playing linebacker next season.

Since then, new details have emerged from Bruce’s attorney showing that Bruce’s playing status is in doubt for the upcoming season. Bruce’s lawyer Kory Pyles spoke with 247 Sports about Bruce’s academic and athletic status for 2018.

I know that they were communicating with him about that stuff, as the school has its own conduct policy. I just know that he’s on his way back. I don’t know the extent of it, whether he was just going back for football or just academically.

Bobby Bruce May Not Be Able to Play Football in 2018

@LaTonyaCLC We are at the airport now with Bobby he is on his way back to Indy now. pic.twitter.com/NfmOcYjgbS

According to 247 Sports, the State of Florida has 175 days from June 8 to proceed on charges against Bruce. Bruce appears to be back in Kansas, and 247 Sports explained how Bruce was able to be released for the time being.

Bruce was arrested on June 7 in Palm Bay, Florida, in connection with an armed robbery, which carries a felony distinction in the Sunshine State. He is still awaiting a formal charge from the state.

After a 33-day wait following his arrest, Bruce’s attorney, Kory Pyles, filed for a motion for release on recognizance. Bruce was released on bond July 12 with the stipulation he can’t possess a weapon and isn’t allowed to contact the victim, according to court records. There are no travel restrictions on Bruce’s release, so he is free to return to school if he’s able.

Bruce has been active on social media, but has not addressed his future. On July 24, Bruce’s old high school coach posted the photo featured above showing the two at the airport, noting Bruce was on his way back to Independence.

Bruce is not the first player featured on Last Chance U to be involved with legal challenges. Former EMCC player Isaiah Wright’s future is uncertain after he was arrested for his potential involvement in a homicide. Wright is not suspected of the actual murder, but was in the car with two of the main suspects after the alleged incident took place. Here’s an excerpt from Florida Today’s report of the incident.

Police say the assailants in the case used Snapchat — a mobile app that allows users to send messages and photos that expire after they have been viewed — to lure the victim into a trap outside his home.

Dwight Bobby Bruce, 20, of the 1000 block of Kennedy Court, Titusville, is charged with armed robbery. He joins his alleged partner in the crime, Andreal Curry, 19, who was arrested Tuesday. 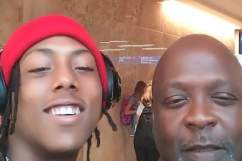 Bobby Bruce, Last Chance U: Where Is He Now?

Read More
College Football, Football, Last Chance U, Netflix
What's the latest news on Last Chance U's Bobby Bruce? Find out why his playing status at Independence is in doubt after his arrest.