Rickie Fowler does not have a wife, but he is about to change that thanks to his recent engagement to girlfriend, Allison Stokke. Fowler announced the news on Instagram after he organized a beach proposal.

“Today is National Best Friend Day so I wanted to lock mine down…I WON!!” Fowler noted in the caption.

Stokke responded with a post of her own along with a photo of the proposal.

On the golf course, Fowler is looking to win his first major, and is in contention at the 2018 PGA Championship. Fowler spoke about his approach at Bellerive.

“We’ll stick to not trying to overpower it and trying to get that extra,” Fowler told ESPN. “Just get the ball in the fairway. You get me in the fairway, and with the soft greens, I feel like we can pick apart the golf course.”

There Has Been No Wedding Date Announced for Rickie and Allison

Fowler and Stokke have not announced a wedding date. Stokke is a fitness model and former pole vaulter who became a national figure after a photo went viral when she was competing in high school. Stokke admitted in a 2016 ESPN W interview that the photo and the attention that came with it still impacts her life today.

Stokke is passionate about fitness and nutrition, often posting workout tips on social media. Stokke spoke with Athleta in 2015 about her typical workout routine.

“I run almost every day, on the track or on grass,” Stokke explained to Athleta. “Most of the running we do is shorter, i.e. multiple sets and reps of 150m or less with varying rest periods. Along with running, I do plyometrics and drills specific to pole vaulting. I also try to add several days a week of yoga and/or stand up paddling, depending on the time of year.”

Stokke maintains a healthy diet, but admits to having a soft spot for mac and cheese. She tries to balance it out with fruits and vegetables.

“[Favorite foods] Macaroni & cheese. Avocado Toast with sea salt, good olive oil & marash pepper (an earthy-tasting red pepper flake from Turkey). Fresh berries,” Stokke told Athleta. “…I’ve never gone on a specific diet where I eliminate or only eat specific foods. I just try to eat well. I love oatmeal for breakfast, eggs as part of any meal, and I almost always carry almonds with me. Competition days can be incredibly unpredictable in terms of the length of competition so I always drink plenty of water and pack snacks like hummus and bell peppers, bananas, and dates.”

If you enjoyed this article, be sure to check out our in-depth profile of Stokke. 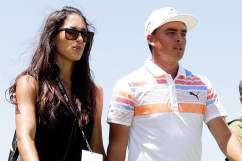