Getty Tate Martell is expected to be the backup quarterback at Ohio State.

Quarterback Tate Martell is one of the featured players on the docu-series QB1: Beyond the Lights. The series was originally released in 2017, but just hit Netflix in August 2018 allowing the show to reach a wider audience. Martell was the No. 2 ranked dual-threat quarterback in the country coming out of Bishop Gorman High School in Las Vegas, Nevada back in 2017.

Martell committed to Ohio State choosing the Buckeyes over 23 other offers including Texas A&M, Alabama and USC, per 247 Sports. Martell redshirted for the Buckeyes in 2017, and has yet to play in a game. Ohio State offensive coordinator Kevin Wilson discussed the decision to keep Martell’s redshirt on.

“We talked about it,” Wilson told Land of 10. “Especially when we got down to the end with the situation we had with J.T.’s [Barrett] injury when we were playing the rival game. I think he would have wanted to play the one game if we needed him, but we’re like, ‘Hey, wait a minute now. That’s a whole year.’ He would lose a year of eligibility if he plays in that game, and we didn’t have it ready, but it was always kind of in the back of our minds. We were fortunate enough to stay healthy and we didn’t need it.”

Martell may not have been able to play in the actual games, but he still practiced with the team. Martell spent last season playing on the scout team, providing the starting offense different looks based on Ohio State’s opponent each week. This meant Martell also spent time playing running back and wide receiving in addition to his traditional quarterback position.

“He’s been a phenomenal quarterback,” Wilson explained to Land of 10. “But based on the look, there were some weeks where we thought we needed him at tailback, and he went and played tailback just because he’s a nice athlete. He’s really kind of become a great [worker] for a freshman, and as a quarterback he has grown a lot. He’s still a young pup, but he’s growing and being a good teammate. I think that’s hard at quarterback, because at quarterback you’re always the guy. I think because of that, he’s earned a lot of respect from a lot of peers on this team.”

Martell Is Expected to Be the Backup Quarterback in 2018

The challenge for Martell is Dwayne Haskins was already on the roster. Haskins was one of the top quarterbacks from the class of 2016, and spent the last two seasons learning from J.T. Barrett. After limited action in his first two seasons, Haskins will begin the season as the starter for the Buckeyes.

Martell has noted that he will still see the field in “special packages”. Martell may not be the starter, but the coaching staff is still high on the quarterback.

“The common denominator in every great player I’ve ever coached is competitive spirit,” Urban Meyer told Cleveland.com. “That’s what made Tebow Tebow. That’s what made Alex Smith Alex Smith, J.T. Barrett — I’m just giving you the examples at quarterback. I see that in Tate Martell, and so does our strength coach. I see a guy that refuses to lose. That’s very appealing to a coaching staff.”

It will be interesting to see how Ohio State uses Martell, and whether Haskins ends up playing the majority of minutes as quarterback. If Martell plays sparingly, the transfer rumors are likely to heat up after the season. 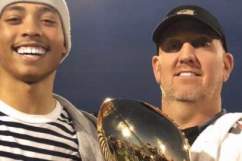 Last Chance U Season 3 Cast: Where Are the Players Now?