Florida State running back Cam Akers is in for a monster season in new Florida State head coach Willie Taggart’s offense. It is hard to be disappointed when you rush for more than 1,000 yards, but many fans were expecting more from Akers during his freshman season. According to Rivals, Akers was ranked as the No. 3 overall recruit in the country and the top running back in the nation. Akers was a five-star recruit and rushed for 1,025 yards and 7 touchdowns last season.

Don’t expect anything modest from Akers this time around, as the running back figures to be the centerpiece of Florida State’s offense. Taggart has a history of feeding his backs in his offense. Last season, Royce Freeman rushed for 1,475 yards and 16 touchdowns on 244 carries at Oregon. For comparison, Akers had 194 carries last season, and only received more than 15 carries in five of his 13 games. At USF, Marlon Mack rushed for 3,609 yards and 32 touchdowns in his three seasons under Taggart. Mack also had 65 receptions for 498 yards.

Here’s what to expect from Akers in the new Noles offense.

Akers is not only going to get more carries, but be more involved in the passing game. Last season, he only had 16 receptions for 116 yards. Taggart calls his scheme the Gulf Coast Offense.

“We’re spread out instead of being packed in there, we put our athletes in space and let them do what they do best,” Taggart told 247 Sports. “The best way to put it is backyard football. When you’re in the backyard and Coach isn’t bothering you, you’re the best thing out there. As soon as you get around the coach, you’re no longer good. You’re trying to do all the things the coaches tell you do. Just go out there and play football like you know how to play.”

As for Akers, he approves of the new concept, and has already admitted he expects to get more touches.

“The offense is looking good,” Akers explained to 247 Sports. “A lot of weapons, a lot of big plays, a lot of touchdowns, and a lot of points. That’s all you can expect.”

If Deondre Francois is back to the form we saw his freshman season, it is only going to enhance Akers’ opportunities. The only thing holding back Akers and the offense is the offensive line. The unit must perform better if Florida State is going to take a step forward this season.

Football Study Hall provided a detailed overview of the Gulf Coast Offense that is worth your time. They explained the philosophy behind the offense.

The original idea of the offense was to translate the power and gap schemes of the “power coast” version of the West Coast offense that Taggart had taught as the RB coach under Jim Harbaugh back at Stanford. At USF they didn’t have the right pieces to make it work but they did have a good supply of athletes, including the stout QB Quinton Flowers, so they went spread so those athletes could play in space.

As a result, they combined the power and down blocking of the West Coast offense with the spread and renamed it after their own region…

The GCO [Gulf Coast Offense] is more of a classical option attack looking to make the most of an athletic QB who can add value as a scrambler on top of using his legs to boost the run game. Of course if a GCO features a QB that can also process defenses and execute the dropback passing game then now you have a Baker Mayfield or a Marcus Mariota and a shot at a national championship.

Look for a heavy dose of Akers in the Seminoles offense now that the Gulf Coast Offense is in Tallahassee. 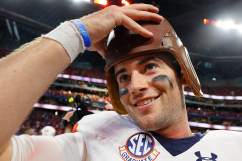