It has been more than a decade since Tiger Woods’ father, Earl Woods, passed away. Tiger has had his share of very public hardships since his father’s passing, but 2018 could be defined as Tiger’s year of redemption. Tiger is on the verge of winning his first tournament since 2013, a moment he would no doubt have loved to enjoy with his dad given the countless hours they shared on the course together.

After Earl’s death, Tiger called his father his “best friend and greatest role model.” Earl was the man who went to great lengths to teach his young son how to play golf, some argue he even went too far with his methods. In the process, Tiger became one of the greatest golfers of all-time. Prior to his death, Earl did an interview with Golf Digest explaining how he began teaching Tiger to grip a golf club at ten months old.

“Ten months old,” Earl told Golf Digest. “I just unstrapped him out of the high chair, allowed him to come over and play and he picked up a putter, put a ball down, waggled and hit a ball into the net. First time. Changed his grip from a left-handed grip to a right-handed grip and proceeded to hit the first one into the net.”

According to The New York Times, Earl died on May 3, 2006, and the cause of death was cancer. Earl also suffered from diabetes, heart problems and poor circulation in his legs.

“My dad was my best friend and greatest role model. He was an amazing dad, coach, mentor, soldier, husband and friend,” Tiger said on his website at the time of Earl’s death (via The New York Times).

Thompson detailed how Tiger struggled after the death of his father, and his life began to spiral downward.

2. Earl Served in the Military for 20 Years & Became a Lieutenant Colonel in the Green Berets

According to Golf Digest, Earl served in the military from 1954-1974. He had two tours in Vietnam, and became a Green Beret. Earl told Golf Digest that part of his motivation to join the military was to be treated as an equal.

… If you consider all the options open to a young black college graduate in 1953, the options were slim and none. If you wanted a fair chance, it amounted to post-office work — take the civil-service exam — or military service. That was it. So the odds are, if I had not taken advanced ROTC, I would have been tossed into the labor pool — black, educated people who corporations did not really want. Overqualified, underemployed and underpaid. I would not have had any reason at all to go to Thailand, and I never would have met Tida, and there never would have been a Tiger.

Earl went on to explain he was only treated as an equal when he joined the Green Berets, but still experienced a racial divide throughout his time in the military.

“…Even in the Army, I was not given a fair and equitable chance,” Earl noted to Golf Digest. “The Green Berets is the only organization that treats you at face value. What you see is what you get…You had separate armies. You had black armies and white armies. Blacks and whites didn’t socialize. We brought all our stuff over there to Vietnam — all of our prejudices. It’s so sick.”

Earl’s military experience is part of the reason Tiger has a fascination with the armed forces.

3. Earl’s Infidelity to Tiger’s Mother Created a Rift Between the Father & Son

Tiger’s affairs became very public over the last decade, but reports indicate Tiger grew up witnessing his father unfaithfulness to his mother. According to ESPN, it bothered Tiger, and caused the two to stop speaking for a period of time. Thompson detailed the start of the conflict when Tiger was in high school.

The most serious rift between them, which festered for years, centered on Earl’s love for women. Tiger hated that his dad cheated on his mom and cried to his high school girlfriend about it. His parents never divorced but moved into their own houses, and the only reason they still needed to communicate at all was their son’s rising golf career; like many overachieving kids in a broken home, Tiger found early on that his talent could help create the family he wanted. He could mend the broken places inside all of them. It’s also clear that Tiger grew up first emulating his dad and then trying to be better than Earl. All sons, whether they love or hate their fathers, or some combination of both, want to cleanse themselves of any inherited weakness, shaking free from the past. This is certainly true for Tiger, whose father seems to evoke conflicting emotions: The best and worst things that have happened in his life happened because of Earl.

According to ESPN, these issues continued when Earl traveled with Tiger.

As Tiger got famous, Earl traveled the world with him. The definitive book about Tiger and Earl, Tom Callahan’s His Father’s Son, details the women in Earl’s orbit. There was a “cook” at the 2001 Open Championship, and when Callahan said she must be a good cook, Earl grinned and said, “She sure knows how to keep that potato chip bowl filled up.” At another event in South Africa, a stream of escorts made their way to Earl’s room. Callahan reports that near the end of Earl’s life, Tiger and Earl stopped talking for a while. ‘Tiger’s mad at me,’ he told the author, and implied that he’d gotten into some sort of woman trouble that his son paid to make go away.

4. After His Father’s Death, Tiger Began Training With Navy Seals

Tiger has long had a curiosity about the military, but it became an obsession after his father passed away. According to ESPN, Woods visited a Navy SEALs training center less than a month after his father’s death. When Tiger was pressed on why he made the trip, he admitted it was because of his father. ESPN detailed the encounter.

‘My dad,’ Tiger said, explaining that Earl had told him he’d either end up being a golfer or a special operations soldier. ‘My dad told me I had two paths to choose from.’

The training visits became more frequent causing some closest to Tiger to worry it was getting in the way of his golf career. When Tiger tore his ACL there was some speculation he did it on one of these training sessions, while Tiger maintained the injury occurred when he was jogging near his Orlando-area home, per ESPN.

On July 22, he finished tied for 12th at the Open Championship, and then came home. In the weeks afterward, he’d announce that he’d ruptured his left ACL while jogging in Isleworth. His news release did not mention whether he’d been running in sneakers or combat boots. At the time, he chose to skip surgery and keep playing. Tiger’s account might be true, as might the scenario laid out in [former swing coach Hank Haney’s] book: that he tore the ACL in the Kill House with SEALs. Most likely, they’re both right. The knee suffered repeated stresses and injuries, from military drills and elite-level sports training and high-weight, low-rep lifting.

5. Tiger Called His Father His Encourager, While His Mother Was the Enforcer

Tiger is fearless when it comes to anything on the golf course, but there is one person that Tiger defers to, his mother. Tiger admits to still being afraid of his mom, but noted his father was the one that balanced out the relationship. Much has been made about Earl’s tough love, but Tiger also is adamant about his father’s role as an encourager.

“My dad was always the person who would plant seeds and give me encouragement but also would say things that would fester inside me that wouldn’t come to fruition for a while,” Tiger explained to USA Today. “He was very worldly and deep in his thinking. My mom was the enforcer. My dad may have been in the Special Forces, but I was never afraid of him. My mom’s still here, and I’m still deathly afraid of her. She’s a very tough, tough old lady, very demanding. She was the hand, she was the one, I love her so much, but she was tough.

Growing up, Tiger would spend hours on the golf course with his father. He detailed a little known fact about their relationship in an interview with ESPN’s Marty Smith. Earl often called Tiger by the nickname “Sam” meaning he had two nicknames. When Tiger pressed his father as to why he called him Sam, Earl did not provide much of a reason other than to say he “looked like a Sam.”

Earl knew the life of an athlete, but spent his college years on the baseball diamond. According to Golf Digest, Earl became the first African-American scholarship player in the old Big 12 conference during his college days playing catcher at Kansas State. It was believed Earl could have played professionally, but he opted to finish school at Kansas State before joining the military. 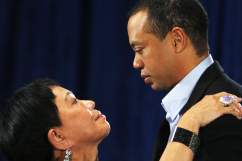