Serena Williams’ sister, Venus Williams, is her biggest fan as long as they are not playing each other. Serena defeated Venus 6-1, 6-2 on August 31st on her eventual path to the U.S. Open final. After the match, Venus spoke glowingly about her sister’s abilities.

“I think it’s the best match she’s ever played against me,” Venus explained to ESPN after the match. “I don’t think I did a lot wrong. But she just did everything right.”

Serena agreed with her sister’s assessment, noting she is feeling the best she has felt on the tennis court since becoming a mother. However, she was not sure it was her best match ever against her sister.

“Obviously, I played much better today than I actually have since I’ve returned to tennis,” Serena said after the match per Sports Illustrated. “…I think it’s by far the best match I ever played against her in forever. But I don’t know about ever, ever.”

Serena enjoyed getting the win but admitted it is always difficult playing against her “best friend.” Serena also noted her sister has been extremely supportive of her career even though they are competitors.

“It is not easy,” Serena told Express. “Venus is my best friend and she means the world to me. She is so supportive of my career. Every time she loses I feel like I do. It is not easy but it is a tournament and we know there is more to life than us playing each other and playing tennis. I love her with all my heart and she is the reason I am here and still out here. I owe everything to her.”

Serena owns a 18-12 Advantage Against Her Sister Venus

If you count childhood matches, the Williams sisters have likely played thousands of matches, but the 2018 U.S. Open marked their 30th official match. According to The Washington Post, Serena holds an 18-12 advantage in those meetings. Serena is 11-5 in Grand Slams, and 9-3 against her sister in title matches. After defeating Venus at the 2018 U.S. Open, Serena joked that she hoped her father, Richard Williams, was not watching his daughters square off.

“I hope my dad didn’t watch!” Serena joked to Express. “It is his two daughters playing each other. It’s not very easy. I know he was probably feeling just as nervous as we both were. We are both winners.”

As Serena goes for her 24th Grand Slam title, Venus is expected to be in attendance to cheer her sister on to victory. 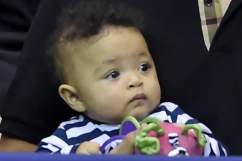