When Cam Newton is not on the football field, he and longtime girlfriend Kia Proctor have their hands full. The couple is expecting their fourth child and welcomed their third child, Camidas, back in 2018. Newton and Proctor were already the proud parents of Sovereign and Chosen. Proctor also has a daughter, Shakira, from a previous relationship. Earlier this year, Proctor scrubbed her Instagram of all images of Newton, but still has photos of the couple’s children.

Newton has been outspoken about his role as a father as well as being someone kids all over the country look up to. Despite being an NFL quarterback, Newton does not plan to push their children into sports.

“I kept getting asked that question on set, and to be honest, whatever he decides to do, that’s what we’re going to push for him to do,” Cam explained to Yahoo Sports.“…Indirectly, everybody wants to know how their son is going to do, or try and foreshadow their kids’ lives. Is football just a waste of time? Is baseball just a waste of time? Is cheerleading something she’s really going to be invested in? For me, one thing that my parents did an unbelievable job of is allowing me to choose what I wanted to do, and they just pushed me to greatness. They held me to a standard of, ‘Well, you’ve decided you’re going to play football, so we’re going to give you every opportunity to succeed.’ That’s all I want to do for my kid and hopefully empower other parents as well to do the same thing.”

As for the future of their relationship, Newton admitted on the docu-series “All or Nothing” that he did not see himself getting married. Newton’s teammate Greg Olsen pressed him on the issue and disagreed noting how much he had seen the quarterback grow.

1. The Couple Is Expecting Their 4th Child

Proctor has been posting photos of her baby bump on Instagram, with the first announcement on May 14th. Back in July, Proctor posted another image with a few words of encouragement.

“Never change who you are because of other people’s actions✨ love yourself and always do what’s best for you ❤️,” Proctor noted on Instagram.

The black-and-white photo captures an affectionate moment before the birth: It’s Proctor, in an elegant, flowing dress, with Newton in his own eye-catching outfit. While facing each other, they focus and caress her baby bump while standing in front of an open window draped by long lacy curtains that complement her dress while framing lights from nearby buildings.

2. The Couple Were First Spotted Together in 2013, But Kia Prefers to Stay Out of the Spotlight

It is unknown how long the couple has been dating, but they were first seen in public together at the 2013 Kentucky Derby. Both Proctor and Newton have recently scrubbed their Instagram pages. Newton’s page is full of either football or fashion posts.

Newton shot a television commercial for Buick with model Miranda Kerr and was asked by Yahoo Sports if it was a difficult conversation with Proctor.

Cam can also scratch off meeting Miranda. “It was a sight to see her and see her work,” he noted. So was that “Hey, I have to go work with a supermodel today” conversation a hard one to have with his longtime love, Kia Proctor?

“Being that [Miranda’s engaged] it makes [the conversation] easier,” the 27-year-old athlete laughed. Considering his girlfriend looks like a model herself, we’re sure she wasn’t worried.

3. Cam Calls Kia the “Best Thing to Happen to Me”

After Chosen’s birth, Newton wrote a letter to his son on The Players’ Tribune in a poem format. The majority of the letter is Newton opening up about being a father, but there is also a small section where he references Proctor.

Your mom is the best thing to happen to me,
Yet I have failed in some regards.
But I still love her unconditionally.

Elsewhere, Newton admits his own deficiencies while telling Chosen to look after his mother and sister.

At times, son, I am not proud of the man that I am.
Some of my decisions are far from perfect.
But do know, when it comes to you and this family, I will always do what I can.
I had to sacrifice some things, and I made it all worth it.
Let no one tell you you’re not strong, that you’re not a king.
My main responsibility is to see your heart gleam.
If I ever leave, make sure you protect the queens of your heart —
That’s your mom and your sister —
And remember that real men aren’t afraid of the dark.

4. Cam Enjoys Being a Father & Admits It Is “Not as Bad” as He Thought It Would Be

With a total of four children, Newton and Proctor are a busy couple. Newton enjoys being a father, and joked with Yahoo Sports that being a parent is much better than he thought it would be.

“Fatherhood has been great. … I’m not as bad as I thought I was!” Newton joked with Yahoo Sports. “It’s something that a person can never really prep for, but for me I just want to be available, and it’s helped me be a better man. There are similarities that I felt being on the set of Buick and seeing those kids light up and ask me questions coming from all across the board. Things like, ‘What do you eat? How hard have you been hit?’ I think Chosen prepped me for being able to be prepared for any kid’s response.”

5. Cam Posted a Heartfelt Message on Instagram to His Step-Daughter Shakira

@Panthers @CameronNewton Cam, Cam the family man. Caught a sweet picture with the family walking back from the premier of @allornothingtv. pic.twitter.com/dsNtcWc5Sa

Proctor has a daughter from a previous relationship, but Newton treats her like one of his own. According to ESPN, Newton posted the following lengthy message to Shakira on her birthday in 2017.

Happy Birthday to the real girl who changed my life ever since we first met five years ago. You have challenged me in ways you will never know, because in retrospect you were my first child. This message isn’t to brag or to even complain about my situation, but this is just real talk. Being labeled a stepdad is hard on the parent just as much as it is for the child to accept it. It is hard work for both parties and I respect any stepparent that takes full responsibility of a God sent child. I remember the first day you called me daddy and I was scared as hell. But when I thought about it, I was honored for you to think of me as not only a male figure in your life but also as a father figure you could learn from as well. Your mom and I are not married, but no one can tell you that I’m not your father and they damn sure can’t tell me that you’re not my daughter. I love you, or better yet, Daddy loves you Kirry. Happy Birthday Shakira aka Kirry aka B1 Gsissy (as ChoCho calls her). 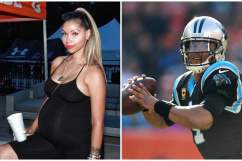