Tonight, Showtime will air a new sports documentary, Shut Up and Dribble. According to CNN, the LeBron James-led series will recount the history of sports dating back to the 1960s, and highlight the African American players who spoke out against political issues along the way. The series will air in three parts, with the first airing tonight at 9 p.m. Eastern.

Shut Up and Dribble will also discuss the current state of sports as a whole, and the influence that athletes like James and Colin Kaepernick have on politics and their fans. The series was directed by Gotham Chopra and executive produced by James and Maverick Carter.

Read on to learn about the cast of the film.

LeBron James as Himself

Alright enough of all that talking bruh! It’s time to work now. That’s all we know! #striveforgreatness? #thekidfromakron? #rwtw? #jamesgang?

LeBron James is the executive producer and co-creator of Shut Up and Dribble. He is among the most celebrated players in NBA history, with four MVPs and three Championship Titles. He currently plays forward for the Los Angeles Lakers.

After Laura Ingraham lashed out at James on FOX News, inspiring the title of the documentary series, he was quoted as saying: “We will definitely not shut up and dribble.”

Jemele Hill as Herself

Had to take a new photo for my new job at @theatlantic. Also, my very first column for them published today — Why Some Black Men Could Relate To Brett Kavanaugh. LINK IS IN THE BIO.

Jemele Hill is a sports journalist and the narrator of Shut Up and Dribble. She previously worked for ESPN, where she was let go after making a series of tweets criticizing President Donald Trump. She currently works for the Atlantic as a staff writer.

When asked about her involvement with Shut Up and Dribble, Hill told the Los Angeles Times that it was an important document for the times. “[The documentary] really caught me off guard but it was something I embraced because I believe in the story they’re trying to tell,” she explained. As everybody in this town is particularly aware, LeBron James is really doubling down in this area at this time in his career.”

Charles Barkley as Himself

Charles Barkley is a retired basketball player and Hall of Fame power forward. He appeared in eleven NBA All-Star Games during his career, and was voted one of the 50 Greatest NBA Players In History in 1996.

Since retiring, Barkley has had a successful career as a television NBA analyst. He works with TNT alongside of Shaquille O’Neal, Kenny Smith, and Ernie Johnson, and he won a Sports Emmy Award for “Outstanding Studio Analyst” in 2012.

Kendrick Lamar as Himself

Kendrick Lamar is a rapper and songwriter hailing from Compton, California. He is one of the most revered artists of his generation, and has been the recipient of 12 Grammy Awards, including two for Best Rap Album and three for Best Rap Song.

His 2017 album DAMN. was the first non-classical and non-jazz recording to be awarded the Pulitzer Prize for Music. Lamar is also a close friend of LeBron James, with the latter often praising his work.

“As an African-American kid growing up in the inner city, they don’t believe that you can get out and become something,” James said during a press conference. “That’s why I’m able to relate to a lot of his lyrics and relate to a lot of his stories. So he’s an unbelievable artist, an unbelievable person. I’m glad he’s able to put those words on to a track and then for all of us to be able to hear it. For me, I definitely appreciate it.”

Craig Hodges as Himself

Craig Hodges is a retired basketball player and coach. He won two NBA championships with the Chicago Bulls, and is one of only two players to win three consecutive Three Point Contests at the National Basketball Association All-Star. Hodges was reportedly blackballed by the NBA after attending the White House in a dashiki in 1991, and giving the president a letter asking him to do more for poor people.

In the trailer for Shut Up and Dribble, Hodges can be seen reading the letter. He states that President George H. Bush never responded to him. Hodges published the book Long Shot about his experiences in 2016. 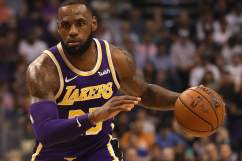 How to Watch Showtime’s ‘Shut Up and Dribble’ Online