Two of the biggest names heading into the MLB Winter Meetings could be on the Chicago Cubs’ radar.

Bryce Harper is unquestionably the offseason’s prize free-agent target, and the Cubs have long been considered a suitor for the former National League MVP. Former Cub and current baseball analyst doesn’t just think the Cubs are a potential suitor, he has placed them as his pick to land the 26-year-old slugger.

Plesac appeared on 670 The Score in Chicago and said:

“I think the Cubs are going to be in on Harper, I really do. I’m not sure that he’s going to get that 10-year, $350, $360 million deal that he’s looking for, but I think if they cut the years down I can see him well over $30 million a year. I think if that’s the case I would have to think that the Cubs would have to be one of the ones that would be in on Bryce Harper.”

“I’m gonna go Cubs. Listen, I just think they’re quietly going through the back door. I don’t think the Nats are an option. Let’s put it this way. I feel really confident that it’s going to be between the Cubs and the Philadelphia Phillies.”

If the Cubs can land Harper, it would almost certainly result in player movement throughout the team’s outfield. Right now, the signed outfielders who made the bulk of the appearances for the team in 2018 were the disappointing and highly compensated Jason Heyward, the arguably underutilized Albert Almora Jr., the promising, but inconsistent Ian Happ, and the one-dimensional Kyle Schwarber. 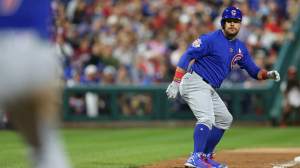 GettyPHILADELPHIA, PA – SEPTEMBER 1: Kyle Schwarber #12 of the Chicago Cubs takes a lead off of third base in the third inning during a game against the Philadelphia Phillies at Citizens Bank Park on September 1, 2018 in Philadelphia, Pennsylvania. (Photo by Hunter Martin/Getty Images)

None of those four men are untouchable. In fact, there is a good chance the Cubs would want to move Heyward and his massive contract–if they could find any takes. Also, there’s likely to be an understanding that if the team hopes to acquire any major talent through trade, it’ll have to part with Almora, Happ, Schwarber and perhaps even troubled and struggling shortstop Addison Russell.

Speaking of potential Cubs trades, there is speculation afloat about a potential deal for the Cleveland Indians’ Corey Kluber. The Cubs have recognizable names in their rotation with Jon Lester, Kyle Hendricks, Yu Darvish, and Jose Quintana. However, Lester is aging, Darvish is injury prone and Quintana is inconsistent. We don’t even need to talk about the catastrophic disaster that Tyler Chatwood was in his first year of a huge deal.

The bottom line is, the Cubs could use some help in the rotation and Kluber would arguably be the team’s new No. 1 starter.

Per ESPN’s Bradford Doolittle and David Schoenfield, Schwarber, Almora, and Happ were a part of theoretical trades that could possibly pry Kluber away from the Indians. Kluber has three years and $40.5 million left on his current deal with two team options after that. That’s an ideal dollar amount with appealing team control for a pitcher of Kluber’s ilk.

Also, moving Schwarber opens a spot in left field for Harper and if Russell, Happ or Almora are moved, it will likely clearly define a position for the players who are left, or open up the possibilities of bringing in a free agent who can give them a dose of speed that they are desperately missing.

If both of these options come to fruition, there should be a legion of ecstatic Cubs fans for the next three months.