Getty Trent Richardson is back in Alabama playing for the Birmingham Iron.

Finding a site to play fantasy football for the new Alliance of American Football league is proving to be difficult. The AAF promised to have an app where fans could play fantasy, but it has not been released with just days remaining before kickoff. As of now, the only site where you can play in a season-long AAF league is Alt Fantasy Sports.

Reddit has created a thread where fans can find AAF fantasy leagues, which is a great resource for those wishing to find a place to play fantasy. FanDuel reported that the AAF app is slated to have the only approved leagues, but this is challenging given the app has not been created yet.

AAF founder Charlie Ebersol has promised a state-of-the-art app to coincide with the new league.

“People are starting to really understand that this is bigger than just delivering football,” Ebersol explained to the New York Business Journal. “My investors are excited because we’re building a tech platform that is beginning to realize the promise of what technology can deliver. For the past 10 years, we’ve been hearing that there’s going to be in-game [fantasy] and in-game gambling. A lot of what we’re saying to people is to start thinking about what it would look like if viewers can be truly active during the game.”

As of now, it does not appear that FanDuel or DraftKings will be offering DFS contests for the AAF. FanDuel customer support recently tweeted that they do not have any plans for daily AAF contests.

“We do not have any immediate plans to offer contests for the AAF, but we’re always looking to add new sports. If anything changes we’ll be sure to let you know!,” FanDuel tweeted.

The Alliance of American Football Will Start on Saturday, February 9

It will be interesting to see if the AAF will launch their new app before the start of the season, or if fans will be left disappointed. The new league kicks off on Saturday, February 9 with two games. Atlanta takes on Orlando, while San Diego squares off with San Antonio. Both games will be broadcast on CBS.

The league has reached agreements with several media partners including CBS, NFL Network and TNT. While these television deals will allow the AAF to gain exposure, fantasy sports has been a big part of the growth of other sports leagues like the NFL. More availability for AAF fantasy leagues can only help increase the chances that the league will have staying power, and the AAF would be wise to figure this out sooner rather than later. 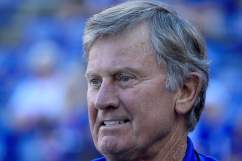 Alliance of American Football: What Is AAF? When Does It Start?

Read More
Football
Where can you play fantasy for the new Alliance of American Football league? We break down the fantasy football sites where you can find a league for the AAF.