Getty Zion Williamson is the favorite to be the No. 1 pick in the NBA draft.

As we were all breaking down images of Zion Williamson’s shoe as if it were the Zapruder film, the Duke big man was hijacked with few people even noticing. The North Carolina and Duke primetime matchup had not even ended before people took to social media to emphasize how Williamson’s injury proved their point.

Those who believe college players should be paid used Williamson as proof. Other concerned about the state of college basketball lauded Williamson’s desire to play this season as great for the game.

Duke announced Williamson is day-to-day, and the big man declined to give any sort of State of the Union address. The suggestion for Williamson to shut it down existed well before his foot freakishly flew out of his Nike PG 2.5’s.

In a world of social media, there is little room for nuance, but Williamson’s situation is far from clear cut.

As several analysts pointed out, Williamson’s injury does little to emphasize why players should be paid. What is the amount that would financially justify Williamson taking on the risk of playing versus what he will earn next season in the NBA? While $100,00 or $200,000 is a lot of money to the common American, it does not compare to the $6.8 million salary that DeAndre Ayton earned for being the No. 1 pick in 2018.

There is a strong argument to be made for players to be able to receive some of the money they are earning for their schools and the NCAA. This would have more of an impact on the 10 to 15 North Carolina and Duke players that are unlikely to have a long NBA career than on Williamson.

For the majority of these athletes, their highest earning potential would be in college when they are regularly on national television. While Williamson, RJ Barrett and others head to the league, many players will end up as bankers, accountants, teachers or whatever industry they choose to enter post-college. Whatever they could potentially earn as college basketball players would have a much greater impact on their lives. The challenge is in a free-market economy it is Williamson and Barrett that would demand the most money.

To be clear, Williamson is going to be fine regardless of what he decides to do the rest of the season. Williamson is in line to sign a record-breaking shoe deal (Nike may owe him one for his troubles) and will earn close to $7 million in the NBA next season as the likely top pick. Thanks to social media, Williamson entered college with millions of followers and successfully built his own brand before ever stepping foot on the Duke campus.

When Do the Games Actually Matter?

We are not too far from an era when athletes were viewed as commodities to be used up by teams until their talents were diminished. The pendulum has swung towards athletes which is not necessarily a bad thing. Williamson is now being criticized for wanting to finish out the season as if he is doing something wrong. If Williamson decides tomorrow that he no longer wishes to play college basketball, there is nothing wrong with this decision either.

All indications are Williamson wants to continue playing at Duke aiming to finish out the season with a national championship. If financial security is the only thing that matters, then Williamson’s decision is foolish. What if Williamson is striving for something more? If Williamson’s goal is not just to earn money, but to be great at his craft then his decision to play makes all the sense in the world.

Playing during March Madness in crunch-time situations and learning under Duke head coach Mike Krzyzewski is only going to help Williamson as he heads to the NBA. We are in a sports era where self-preservation has become the goal.

Players like Anthony Davis are demanding trades with a year-and-a-half left on their deals. Le’Veon Bell just finished sitting out an entire NFL season. Antonio Brown is courting teams on Instagram Live videos while he is under contract with the Steelers. It is a cold business where players can be traded based on a GM’s whim, but at what point do leagues risk alienating fans?

A big reason athletes are able to earn lucrative contracts are massive television deals. These contracts are based on the immense amount of interest in sports. If everyone begins to shut things down for self-preservation, there is no product and fans will become disinterested. The Ringer’s Mark Titus sent out this toungue-and-cheek tweet.

Future of basketball is everyone sitting out to preserve draft stock, demand a trade, not jeopardize max contract, etc. All NBA content will just be shots of guys walking into the arena/on the bench, player tweets, and fake trade proposals, and computers will simulate wins/losses

Most athletes get into sports because they enjoy playing the games. A select few have enough talent to make money off this passion. Williamson does not owe anyone anything, but if he decides to keep on playing, more power to him.

In the words of 2 Chainz (paraphrase): “You gettin’ mad? Zion is getting rich.” Williamson will most certainly be rich later this year, but let’s pump the breaks on criticizing him for wanting to enjoy a few more months of college. 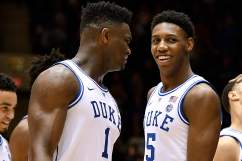 Read More
College Basketball, Duke, NBA Draft
Should Zion Williamson sit out the rest of the college basketball season and head to the NBA? Find out why the argument is missing the point.