Those following March Madness know who Ja Morant is. He’s the hyper-athletic star of the Murray State Racers, who knocked out No. 5 seed Marquette by double-digits to advance to the Round of 32 in the West Regional. The sophomore guard, whose real name is Temetrius, notched a 17-point, 16-assist and 11-rebound triple-double against the Golden Eagles.

He also finds himself high up on NBA Draft boards. ESPN ranks him as the best point guard in the 2019 class, as well as the No. 3 player overall behind Duke’s Zion Williamson and R.J. Barrett.

There’s one person who would disagree with that assessment. Morant’s father Tee is pretty vocal about his son going No. 1. When asked where Ja should be drafted, he responded: “Is there anything before one?”

Beyond having a famous son, there’s a lot to discuss about Tee. Here’s what you need to know:

According to The Big Lead, Tee Morant played high school basketball alongside Ray Allen at Hillcrest High in Dalzell (S.C.). While the 10-time All-Star took a full ride to compete at Connecticut, the elder Morant laced up for the Claflin University Panthers in Orangeburg (S.C.).

Both Allen and Tee Morant were mentored by Ja’s high school coach Dwayne Edwards. Back in the late 90s, Edwards led the Hillcrest program. Now, he is the head man at Crestview High on the Carolina coastal town of Sumter.

Without taking a shot at Tee nor Allen, Edwards mentions that he hasn’t had a player he trusts more than Ja Morant to run his up-tempo offense, nor has he seen a harder worker. From The Murray State News:

Edwards knows a thing or two about talent evaluation. As an assistant coach at Crestwood High, he coached a team consisting of Ja’s father Tee, as well as NBA great Ray Allen. He said Ja’s tireless work ethic in high school directly correlated to his success on the court.

“Ja would practice with me, then he’d go home and practice with his daddy after practice,” Edwards said. “You couldn’t open the gym enough for Ja Morant. You couldn’t open it enough. ‘Coach, can you open the gym this Sunday? Can you ask coach Brown?’ We’d finish up, then he’d go to the backyard with his daddy and shoot some more.”

2. Tee Played Overseas and Nearly Missed Playing in the NBA 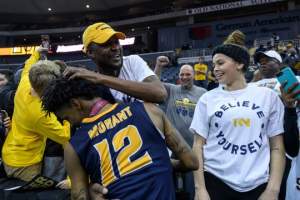 Per another profile by the Murray State News, Tee narrowly missed playing in the NBA after his career at Claflin.

“After participating in free agency camps and playing internationally,” Blake Sandlin writes, “Tee’s professional aspirations were cut short when he found out his wife was pregnant with Ja.”

With his basketball career over, Tee supported the family by becoming a barber. He mentions this when talking about the tight-knit Morant family, and how Ja’s grandmother, Linda “Mama Lin” Smalley, particularly supports him.

“I don’t care how the performance was or if it was sports, Mama Lin had encouraging words always,” Tee said. “That’s the crazy thing, because I work at a barbershop and I tell a lot of people that there ain’t too many grandmas out there these days that are willing to drop everything for their grandchild… Mama Lin was never pushing the envelope as far as him being an NBA player or Hall of Famer or anything; Mama Lin was pushing for him to follow God’s plan.”

Tee, on the other hand, actively molded Ja into the player he is today. This has been acknowledged by the younger Morant.

“He just knows what it takes,” Ja said of his dad. “Everything is really just a credit to him. The main thing out of my game that he had was his athleticism. He could jump and had the drive to play defense.”

After the win over Marquette Thursday, father and son talked shop. From Nicole Auerbach of The Athletic:

“When he gets back to the room, he’ll probably ask me what he did wrong,” Tee says. “He’s a self-critic, but he calls me his first hater — which I am. I still hate on him. But he played a marvelous game, and he showed why he’s the hottest topic (in sports) right now.”

Tee says he and Ja would indeed address the turnovers, but it doesn’t surprise him that his son might turn the ball over with so many minutes of action against elite competition on a stage like this. “I’m more intrigued by what he does as a leader on the floor,” Tee says. “Everything else is secondary.”

Tee extends this mentorship to others through the Tee Morant Skills & Agility Training Camp, a development program he runs back in Sumter.

4. He Thinks His Son is Better Than Zion Williamson

“What he did out here proves that he’s the best player in the country.” pic.twitter.com/6Rj7bdCSjM

As mentioned before, Ja Morant will likely go in the top-3 of this summer’s NBA Draft. After his triple-double against Marquette, Tee did some quick interviews with Bleacher Report’s Master Tesfatsion.

Outside of the “”Is there anything before one” bite, he said that “What he did out here proves that he’s the best player in the country.”

He did get to see his son play in the same AAU league as Zion Williamson, so Tee has seen the best up close and personal.

While boatloads of opinions feel that Zion Williamson is a trascendent talent that far outranks Morant, a few feel that the Racers guard fits better in today’s NBA. Henry Bushnell of Yahoo Sports says:

“It’s not entirely clear how Williamson will fit into an NBA lineup. It is clear that Ja will be a lead, ball-dominant guard who can do what he’s doing at Murray State: Create for himself and others.”

He equivocated by saying that Williamson’s skillset is particularly rare and may outweight this argument. Then there’s people like IndyStar’s Gregg Doyel, who compared Morant to a “hybrid superhero” combination of Russell Westbrook and Allen Iverson.

Basically, Tee isn’t the only person with an incredibly high opinion of his son’s ability.

5. The Morant Family is Incredibly Close 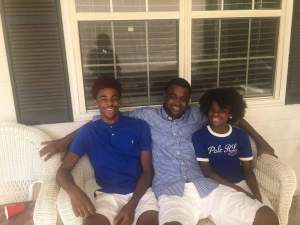 FacebookTee Morant (middle) with his family, including Ja Morant (left).

Lastly, Sandlin’s feature shows how close the Morant family is, and how the connection is fueled by their Christian faith. After few schools offered Ja while friends such as Williamson racked up interest, he turned to mom and dad among others for emotional support.

Though he was distraught, he didn’t show it. He continued to work in silence, praying he would ultimately see the fruits of his labor. Through it all, though, it was his relationship with his mother and father that helped him endure. The Morants had a mantra, “These four walls,” meaning anything that didn’t affect the bond between the tight-knit family was none of their concern.

Tee did his best to console his son. He constantly reminded him that “cream would always rise to the top.” Jamie was quick to remind him he was “beneath no one,” a phrase Morant has tattooed on his left arm.

While the direct emotional support came from the parents, Ja sought spiritual guidance from Mama Lin.

Smalley, who lives in Appling, Georgia, would sometimes get texts from Ja asking for prayer or a simple scripture to get him through his day. Smalley said Ja told her he felt like God had big plans for him, even though his current struggles weren’t reflecting that.

“There was times when I used to go back to Georgia and stuff, she used to take me and my cousins to church,” Ja said. “I know everytime she could just feel when something was up or anything, and she would just tell my mom to give me a prayer or scripture to read. I just got so comfortable with it that times when I felt like the Devil is trying to attack me or anything, I’ll just go to her.”

Tee will be back in Hartford’s XL Center Saturday to watch his son try to lead Murray State to the Sweet 16 with a win over Florida State.