PJ Washington has a large chest tattoo which is mostly covered up by his Kentucky jersey during games. Washington gave fans a full look at his tattoo thanks to a 2018 Instagram post. Washington was with his Kentucky teammates in the Bahamas for a few exhibition games prior to the start of the college basketball season.

On the right side of Washington’s chest is the Bible verse Proverbs 3:5-6. Here is a look at the NIV translation of the text.

5 Trust in the Lord with all your heart and lean not on your own understanding;
6 in all your ways submit to him, and he will make your paths straight.

Washington has Jesus tattooed with a cross behind him on the left side of his chest. Washington emphasized how important his faith is to him and his family. According to Kentucky.com, Washington initially had the Bible verse tattooed and added more to it prior to his sophomore season.

His parents made church-going a regular Sunday-morning outing, he said before adding, “I’m really a Christian guy.”

Shirtless photos of Washington and other Kentucky players went viral prior to the season. Washington showed off the work he put into health and fitness during the offseason, per Kentucky.com.

Actually, Washington corrected, his family members said they thought he looked skinny in the “after” photograph. “I’ve been working hard,” he said, “and the results have been coming in. And I’m just proud of it.”

Washington missed the first two games of the NCAA tournament as he recovered from a foot injury. The Kentucky big man returned for the Wildcats Sweet 16 matchup with Houston. Kentucky head coach John Calipari believes his team would have lost to Houston without Washington in the game.

“It’s good to have PJ back,” Calipari noted to USA Today. “We don’t win the game today without him. We don’t. What he did and how – the presence that he adds to the game and his ability to pass and do different things, and you’re not going to bow guard him, not going to muscle him. You’re not going to push him around.”

Washington suited up but admitted that he did not feel like he was at full strength during the game.

“It’s on 10 right now [pain scale],” Washington explained to USA Today. “It’s definitely hurting. I’m just trying to ice it right now, trying to get some treatment and get some sleep.”

Washington is having a monster year at Kentucky and has the potential to be a lottery pick in the upcoming NBA draft. 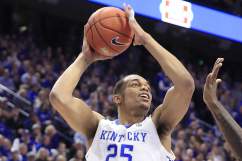 Read More
Basketball, College Basketball, Kentucky, March Madness
What tattoos does PJ Washington have on his chest? What are the meaning of the tattoos? Learn more about Washington and the story behind his tattoos.