Getty Tacko Fall has been reunited with his mother for the first time in seven years.

Tacko Fall has been the face of UCF basketball since he arrived on campus, and it is only fitting that Fall’s mom, Marianne Sene, will watch him play his final game in Orlando.

It means a lot. I haven’t seen her for seven years. She’s never seen me play before. Her and my brother are here, both of them. We haven’t been together for so long. It felt like I was dreaming. She’s been my greatest supporter and I’m ready to play in front of her finally…

It was very emotional. Emotional on her part. I guess she didn’t expect to see me like this because when I left I was a lot younger, a lot shorter and a lot skinnier. She’s loving it here. I don’t think she wants to go back yet, but hopefully we can get here more often now.

Tacko Fall Is Originally From Senegal

Yup! @tackofall99 and his mom are together for the first time in over 6 years!! ?

She’s here to watch him play basketball for the first time ?

Thanks to his 7’6″ height, Fall stands out every time he is on the court, but his game has become more polished than when he started at UCF four years ago. Fall left Senegal to pursue his dream of playing basketball. Fall played high school basketball near UCF at Liberty Christian Prep.

Dakar is the capital of Senegal which is located in West Africa. Fall came from humble beginnings to now potentially leading UCF to their first NCAA tournament in more than a decade. The Orlando Sentinel detailed Fall’s upbringing in a 2015 article.

The merchants at the bazaar in Dakar, Senegal weren’t too specific about sizes. Fall’s mother, Marianne, just bought her boy the largest pair sandals she could find. The animal skin was tough, but not tough enough to contain those expanding feet.

“Whenever the shoes were destroyed, I’d sew them up,” Fall said.

Money was tight, so he’d wear the same clothes all week. His eyesight wasn’t good, so he got a pair of thick, horn-rimmed glasses from a hospital. When his glasses broke, Fall would patch the frames with Scotch tape or athletic tape or duct tape.

Co-worker: Learn anything new over the weekend?
Me: How many tacos tall do you think Tacko Fall is? pic.twitter.com/EAXvwp3mzo

Fall has bulked up to 310 pounds to go with his 7’6″ frame and has a massive 8’4″ wingspan, per USA Today. Sene will get to see her son play and why many are calling UCF a sleeper team if they make the NCAA tournament.

“Tacko Fall’s mother was recently approved for a visa so she could travel to the U.S. Up until their reunion earlier this week, they hadn’t seen each other for seven years. Thursday night, Tacko’s final home game, will be the first time she’ll see him play,” UCF Sports’ Brandon Helwig tweeted.

Fall noted his mother has not been able to see a full college game in Africa. Sene has only seen highlights of Fall’s games thanks to YouTube.

“She follows the UCF Basketball page on Youtube, so he could see a couple highlights but she’s never seen a game,” Fall explained to UCF Sports. “Even on the internet. She was never able to watch a full game. She’ll be finally able to watch us play and watch us get the dub tomorrow.” 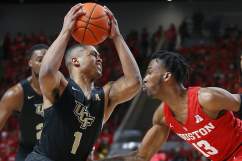