Getty Tacko Fall is originally from the Senegal.

Tacko Fall has become one of the faces of March Madness, but it has been a long journey for the UCF center. Tacko’s mother, Marianne Sene, still lives in Africa where Tacko is originally from.

“We were hurting,” Tacko explained to the Orlando Sentinel. “There were times when I went to school hungry and other times when the electricity got cut off, but my mom worked all different jobs to keep us going. I owe her so much for all the sacrifices she made for us. The final sacrifice was letting me come to America…She made it clear, that I could pursue basketball, but only if I got a college education in the process. She wasn’t going to let me leave just to play basketball.”

Tacko is 7’6″ and one of the tallest human beings in the world. His future is not clear once his college basketball career ends, but the UCF big man will have plenty of opportunities. Tacko wants to be an “ambassador for the sport” in Africa as Sports Illustrated detailed.

As always, Fall has bigger things in mind. He wants to be an ambassador for the sport in his home continent. The NBA is starting a league in Africa, and Fall would be a perfect liaison whenever his career is over. When his mother visited Florida for the first time early in March, she wore a gorgeous Senegalese robe, called a boubou, to the game. Fall wants to wear one on the night of the draft. If he does, it would be a special moment for an untold number of African children, boys and girls.

1. Tacko’s Parents Are Not Particularly Tall

Being one of the tallest 40 humans on the planet would make you think Tacko comes from a tall family. Tacko’s massive height is still a mystery as the only other tall person in Tacko’s family is his uncle. Yahoo Sports detailed Tacko’s parents’ ordinary height.

Elhadji Tacko Sereigne Diop Fall was born and raised in Dakar, Senegal, the largest city in the westernmost country in Africa. There was no early clue that Tacko would be a giant. He has an uncle who’s about 6-8, but neither his brother nor his half-sister are especially tall. Neither are his parents. Yet up Tacko sprung, so tall that in his early teen years there was only one pair of sandals that fit him. He kept busting out of them and he had to keep patching them together. There was no other way. 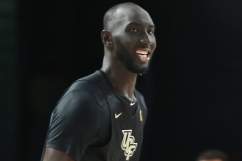 Tacko Fall’s Height Measurements: How Tall Is UCF Center? Is He Tallest Player?

While Tacko communicates with his mother daily, Marianne is not able to watch any of Tacko’s games in Africa. She is limited to watching highlights on YouTube to keep up with her son’s play. Earlier this season, Tacko and his mother were reunited for the first time in seven years. Marianne flew to Orlando to be there for Tacko’s final UCF home game.

“It was like the day he was born when I held him in my arms,” Marianne told the Orlando Sentinel. “I can’t describe the joy of seeing my son play for the first time.”

3. Tacko Is a Foot & a Half Taller Than Both His Parents

“When I walk in the grocery store, I can see on top of all the shelves and I can reach over anything that I want to,” Tacko explained to People.

4. Tacko Is From the Country of Senegal in Africa

Tacko Fall has been all over your timeline tonight. ?

Here's what he's all about ⬇️ pic.twitter.com/i3kN4jDCWV

Tacko was born in Dakar, Senegal but left for an opportunity to pursue basketball in the United States. Tacko was discovered in Africa by the brother of former NBA player Mamadou N’Diaye.

The road to Orlando for Elhadji Tacko Sereigne Diop Fall was long and fraught. He was discovered in Dakar by a brother of former NBA player Mamadou N’Diaye, and he was recruited to play in Texas at a charter school at age 16. That school closed, and Fall, already homesick, was left without paperwork to stay in the U.S. He went to Ohio, where his father and younger brother had emigrated, and then Georgia and Tennessee—basically a nomad who spoke French better than English and understood soccer better than basketball. Finally a p.r. executive in Tavares, Fla., named Mandy Wettstein heard about Fall and opened her home to him and another boy from Senegal.

5. Tacko’s Dad Is a Cab Driver That Lives in the United States

Tacko’s mother was not initially convinced that her son should travel thousands of miles away from home. Tacko’s father living in the United States along with an opportunity for a better education helped Marianne give her blessing.

“My mother was focused on education but said it wouldn’t hurt to try it out,” Tacko noted to the Orlando Sentinel. “When they said I possibly could come to the U.S. and play, that’s what pushed her. My dad was here, he lived in Ohio, and there would be more opportunity.”

According to the Orlando Sentinel, Tacko’s father is based in Ohio where he is a cab driver. Prior to settling in Florida, Tacko had short stints in Texas, Georgia and Tennessee.