Getty Jayson Tatum has been linked to singer Ella Mai.

Jayson Tatum does not have a wife but has been linked to singer Ella Mai. Tatum started sliding into Mai’s Instagram mentions then footage emerged of the Celtics star at her concert just hours after playing a game.

“That time Jayson Tatum flew from Boston to Baltimore hours after his game to see Ella Mai ?,” Twitter user @k_flexxman posted along with video from the concert.

That time Jayson Tatum flew from Boston to Baltimore hours after his game to see Ella Mai ? pic.twitter.com/Ouu7aw2eF6

There is no evidence the two are dating, but Tatum’s appearance at her show has some wondering if the two are an item. We will have to see if anything serious comes out of it.

Tatum’s Ex-Girlfriend Samie Amos Called Him Out on Instagram

Things did not seem to end on the best terms with Tatum and ex-girlfriend Samie Amos, who played volleyball at Duke. Amos posted a lengthy message on an Instagram story at the end of 2018 and tagged Tatum, per Sports Gossip.

You think you “played” me BUT, who ended up losing? I mean what did I lose? A boy that didn’t appreciate what I did for him? What did you let go? A girl that would go out her way just to please you and someone that rode with you through thick and thin. A girl who loved you regardless of your flaws (trust me there was a lot). You can easily be replaced, but a girl like me? Good luck finding a girl who put up with you like I did. Sorry, you played your damn self.

Amos spoke to Trib Live in 2014 about why she committed to Duke.

“I didn’t imagine committing to a school this early on,” Amos told Trib Live. “But I really loved the coaches and the campus at Duke. They just blew me away as soon as I got there…The pull was very hard on me because I really loved Penn State, and because there are a lot of people from around here that love Penn State, and the volleyball is ridiculously good there. But when it came down to them and Duke, I just had a feeling in my heart that I knew which school was best for me.”

Tatum has a son, nicknamed Deuce, that just turned one-year-old and the mother is reportedly Toriah Lachell. It does not appear that the couple is still together, but Lachell has posted positive things on social media about Tatum’s dedication to being a father.

??? dedication day for my bby pic.twitter.com/Bd1RVLXZGP

Back in the fall, Tatum showed off two tattoos, one featuring his son and another one with a nod to St. Louis.

According to the Boston Globe, Tatum has been able to set his family up in the future by living off his endorsement money.

“My biggest plan was for my rookie deal — not to spend any of my NBA money and just try to make as much money as I can off the court,” Tatum told the Boston Globe. “I’ve been able to do that. I haven’t spent any of my Celtic money. I’ve lived off my endorsements…When I picked my agent, I told him I want to do as much off-the-court stuff as I can. Right now I’m young, so I try to do everything as much as possible. Sometimes my agent will tell me it’s OK to say no, but for me I don’t really turn anything down. Tomorrow is not promised. You’re not promised the next contract. You want to save all the money you can. So we just want to live off all the stuff we make off the court and still hopefully that next contract comes.” 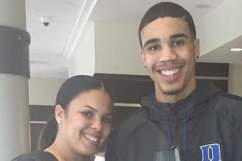