In a fight that lacked emotion, action and above all, fists, jabs and strong hooks, Saul Canelo Alvarez defeated, by decision, Daniel Jacobs on Saturday, starting with triumph the celebration of Cinco de Mayo for many of his fans.

The Mexican, with a record of (52-1-2, 35 knockouts) beat his opponent in front of the three judges, who gave the results of 115-113, 115-113 and 116-112, but did not fully convince, in a fight that occurred in the middle of packed T-Mobile Arena, in Las Vegas, where very early boxing lovers began to arrive, who kept shouting the name of Canelo.

Even between rounds, when the place rumbled with the Mexican songs that filled the atmosphere, Canelo was the protagonist.

And although Jacobs also had a strong support, it was more than obvious the redhead’s fans, who also kept chanting the name of Mexico, took over the arena.

The fight seemed to be pretty even in the first two rounds, when many of the attendees began to shout that they wanted action, because they were sleeping, and although there were glimpses at times promising action in the ring, in general it was just for a few moments

In the third round Canelo gave some punches to Jacobs, who reacted, but in the fourth round, left punches and his excellent defense, led him to victory.

In the fifth round Canelo tried to corner Jacobs, and although he threw a couple of good punches, the New Yorker did not give ground and there was no strenght either. 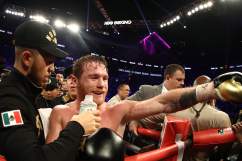 The fight continued along that same route, but in rounds six and seven, Jacobs began to lose strength and his blows did not hurt the Mexican in the least, who took him in a moment against the ropes, but without results.

The eighth round seemed to be the moment for Canelo to send Jacobs to the canvas, with a cocktail of punches, but not only the triumph did not happen in this round, but ended with Jacobs taking over, and took Canelo to the ropes for a few seconds before the sound of whistle of the referee, but nothing happened.

In the ninth round the exchange of blows continued even, but in the tenth the booklet seemed to change a bit and Jacobs momentarily regained the strength and put the Mexican in trouble, not only taking him to the ropes but landing a couple of dangerous blows, in the best round for the Brooklyn boxer.

Although there was no expected knockout, the final round defined the fight. Jacobs, who fell on the floor on the 12th round, not because of Canelo’s work, but after losing his balance, confirmed that he had no clear strategy to take on the fight, while as Canelo said, the Mexican fought with control and with calm, which it worked.

In the end the decision of the judges sealed his triumph, to the rhythm of “Mexico lindo y querido” and a mixture of joy from his fans for the victory, but some disappointment, because they felt that both fighters were owed them a good show.

“We knew it was a matter of patience and in the end the triumph was given to us,” said the 28-year-old Mexican, who by his agreement with the DAZN firm will take about $35 million, while Jacobs will receive about $10 million, although the information the commission official says he will earn only $2.5 million.

Born to fight. Born to win. #GodzillaMovie in theaters May 31 #ad

The fight was sponsored by Hennessy, a brand that works together with Canelo Álvarez in the campaign “Never stop, never stop”, with which the boxer wants to take a message of inspiration and strength to the Latinos who follow him, not to believe in the limits and not surrender to the challenges.

In one of the previous fights, which most excited the attendees, the boxer JoJo Díaz Jr. defeated Freddy Fonseca in the light weights and gave an example of what it is to win with strength.

“It is the result of the hard work we have done and this at 130 pounds makes me feel more comfortable, because I have a stronger punch,” said the Mexican, at the end of the match, while proudly wearing his champion’s belt.

Among the celebrities who attended the fight were singer Usher and Oscar de la Hoya, from the company that represents Canelo, as well as Triple G fighter and Mario Lopez.
READ MORE: Canelo beats Rocky Fielding