Getty Giannis Antetokounmpo is originally from Greece but has African roots.

Giannis Antetokounmpo’s Greek nationality is known by most fans, but “The Greek Freak” also has African heritage. Antetokounmpo is originally from Athens, Greece, but recently opened up about how he embraces his Nigerian ethnicity.

“I grew up in a Nigerian home,” Antetokounmpo explained to The Undefeated. “Obviously, I was born in Greece and went to school in Greece. But at the end of the day when I go home, there is no Greek culture. It’s straight-up Nigerian culture. It’s about discipline, it’s about respecting your elders, having morals.”

Antetokounmpo’s parents, Charles and Veronica Antetokounmpo, were originally from Lagos, Nigeria. They moved to Greece in 1991 to seek better opportunities for their family. Antetokounmpo speaks two languages, English and Greek, while understanding a bit of the Nigerian languages. The Greek Freak emphasized the number of dialects spoken in Nigeria.

“I can understand it a little bit. I can count. It’s not like I’m fluent,” Antetokounmpo noted to The Undefeated. “It’s not like I can go back home to Nigeria and they can understand what I am saying. It’s kind of funny. Both my parents are from Nigeria. But Nigeria is like 250 dialects, so my mom and my dad don’t speak the same language.”

Giannis Once Faced Racism in Greece Because of His African Roots

Finding Giannis | NBA on TNTThe story how NBA sensation Giannis Antetokounmpo's one of a kind talent was discovered. Watch highlights from Inside the NBA with Shaq, Charles Barkley, Kenny Smith and Ernie Johnson and more! Subscribe now to be updated on the latest videos: youtube.com/nbaontnt?sub_confirmation=1 Connect with NBA on TNT: Follow NBA on TNT on Twitter: twitter.com/NBAonTNT Like NBA…2019-02-17T05:11:58.000Z

Antetokounmpo is viewed as a hero in Greece, but this was not always the case. Growing up in Greece, the Bucks All-Star faced discrimination because of his heritage. Nikos Odubitan is the founder of an advocacy group for immigrants in Greece and spoke to The New York Times about some of the challenges Antetokounmpo faced.

“he has become the ambassador for Greece,” Odubitan explained to The New York Times. “Of course, we are all proud of what happened. But this is not what it takes to be a Greek citizen. We have engineers, doctors, all kinds of professionals, and the Greek state does not recognize them. Why does it take being a basketball talent?”

According to The New York Times, one of Antetokounmpo’s brothers, Thanasis Antetokounmpo, plays professional basketball in Greece and was called a “monkey” by a Greek sports television commentator. Antetokounmpo stood up for his brother and their family’s heritage.

“My brothers and I are Greek-Nigerian,” Antetokounmpo wrote, per The New York Times. “If anyone doesn’t like it, that’s their problem.”

The Greek Freak Grew Up as “A Guy You Would See in the Street, Hungry & Looking for Food”

Just How Good Are the Antetokounmpo Brothers?Are they the best brothers in basketball? . . . . Ever heard of the Ball brothers… Highroller Nation Gear! highroller-nation.myshopify.com/ Follow me on Instagram: instagram.com/jxmyhighroller/ Beat: "Trap Sax – Nish" Be sure to subscribe and turn on notifications for the latest content from ya boy Jxmy! We doin this a couple times a week,…2018-07-01T19:07:00.000Z

Antetokounmpo has come a long way and overcame his family not having a lot to become one of the best basketball players in the world. Chris Odoemelam is someone who grew up playing pick-up games with Antetokounmpo.

“He was just a guy you would see in the street, hungry and looking for food,” Odoemelam noted to The New York Times. “He didn’t have anything. He had one pair of shoes that he had to share with his brothers. And now he’s a millionaire. It’s crazy.”

The Greek Freak has gone from having one pair of shoes to having an endorsement deal with Nike. Whatever success remains for Antetokounmpo, he is proud of where is he is from. 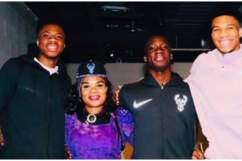