The 2019 Kentucky Derby is not without complications, but our predictions outline the best picks for today’s race. With the favorite Omaha Beach scratched, the field is as wide open as ever. There is also the weather factor as rain is likely to make the track a bit muddy.

Bob Baffert’s trio of horses (Game Winner, Improbable and Roadster) were the three favorites, but Maximum Security has risen from Morning Line odds of 10 to 1 to 9-2 on the day of the race. The horse that I like is Baffert’s stud Improbable.

The horse finished second on a wet track at the Arkansas Derby, but will not have to deal with winner Omaha Beach this time around. Improbable has not finished lower than second during his racing career.

Improbable Is the Bob Baffert Horse to Watch

Improbable is one of just two horses in the field that has a Beyer Figure greater than 100. Bob Baffert spoke about his three horses to Blood Horse.

I think they’ve all been among the elite 3-year-olds this year. Game Winner was the champion and he’s right there and has never run a bad race. Roadster, who’s a bit late to the party, ends up winning the grade 1 Santa Anita Derby and has been doing well since. And Improbable was so lucky to get in after his little gate antics (in the Arkansas Derby), which could have been disastrous for him. It’s like one of those Final Four games where you win the semifinal by a basket and you get in the final and win the whole thing.

They’re horses who all have different little styles, but at the end of the day, they’re just really top 3-year-olds and we’re here. That’s what it’s all about.

My bet is Baffert horses will finish one-two while War of Will sneaks into the top three. Be sure to also checkout our picks for the best mudders if the track turns wet.

Kentucky Derby Trifecta Pick: No. 1 Improbable. No. 2 Game Winner. No. 3 War of Will 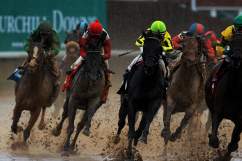