Getty Steph Curry and Chris Paul are the two highest paid players in the NBA.

For the 2018-19 season, the average NBA salary is $6,388,007, per Basketball-Reference. Like most pro sports leagues, the NBA features a wide range of salaries.

NBA players start their career with a salary and contract based on where they are drafted combined with the salary cap number. For the 2018 NBA draft, the first pick started with a salary of $6.74 million while the last pick of the first round made $1.34 million this season, per Spotrac.

Steph Curry Is the Highest-Paid NBA Player With a $37.46 Million Salary

A Select Few NBA Players Qualify for a Supermax Contract

There are a few players who qualify for a supermax contract. A player can receive a supermax contract as long as it is the team that drafted him, and he has either been named to the All-NBA team, won the MVP or won the Defensive Player of the Year Award. For example, the Hornets can sign Kemba Walker to a five-year, $221 supermax contract this summer, per ESPN’s Bobby Marks.

Here are the options for Kemba Walker as he enters free agency:

Difference between the super max and signing with a new team is $80M.

The supermax was designed to help teams retain players instead of losing them via free agency. It has made it particularly hard for small market teams who often face the decision to overpay for a current player given the complications of attracting players in free agency.

How are NBA players able to make so much money? There are a variety of factors but one of the main contributors is the NBA’s television contracts. According to CBC, the NBA’s current deal with ABC, ESPN and TNT that runs through the 2024-25 season is worth $24 billion. CBC estimated that the league earns $2.6 million per year from the TV deal.

All NBA teams operate under a salary cap which means players have a maximum amount of money they can be paid per year. The projected salary cap for the 2019-20 season is $109 million, per The Athletic’s Shams Charania. The projected luxury tax amount is $132 million which means teams will be penalized financially for every dollar they spend over this amount. 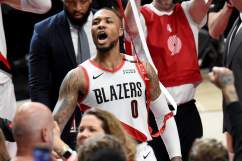