Getty Jon Rahm and Rickie Fowler are two golfers to target this week for the PGA Championship.

The PGA Championship marks the second major of the year as Tiger Woods looks to win back-to-back tournaments. We offer our top picks for the 2019 PGA Championship by focusing on the best sleepers and contenders. It can be a bit difficult to predict the outcome given the location of the PGA Championship changes every year.

This year’s tournament is at Bethpage in New York. The PGA does its best to give the tournament a similar feel each year despite the location varying. Bethpage’s head professional Charlie Bolling suggested to ESPN that fans should be targeting golfers who are in great shape.

“One of the things nobody talks about enough with Bethpage is the physical requirement of the golf course,” Bolling told ESPN. “It’s a little bit of an endurance test. It’s a long walk, mileage-wise. If a typical 18-hole round of golf is a 5-mile walk, Bethpage is about a 6-mile walk. If you got a guy like Tiger Woods, and I know he’s fit, these are the factors that go into considering Tiger Woods and Phil Mickelson as favorites. This is a big, big walk.”

Total Strokes Gained is a good stat to explore if you are looking for a bit of an edge this week in fantasy golf, DFS or betting the PGA Championship. The top five in the category are all familiar names who could be in contention when the final day of play rolls around. Rory McIlroy, Dustin Johnson, Justin Thomas, Justin Rose and Tommy Fleetwood round out the top five in the category.

Here is a look at my top contenders and sleepers for the 2019 PGA Championship. The prices listed to the right of each golfer is based on DraftKings.

GettyTony Finau should be in contention at the PGA Championship.

Rickie Fowler ($9,300)- Fowler seems to have found his footing after hitting a bit of a slump at The Players and Arnold Palmer Invitational earlier this year. He is coming off two top-10 finishes including ninth place at Augusta. Fowler continues to knock on the door for winning his first major but consistently performs well at big tournaments. Fowler sits 12th in total Strokes Gained.

Jon Rahm ($9,500)- Rahm has finished in the top-12 in his last three tournaments, including placing T-9 at the Masters. Rahm has finished in the top 10 seven times in 2019 and only finished outside the top 10 in two of his tournaments this year. It is only a matter of time before Rahm notches one of these big tournaments. As long as Rahm can keep his composure all four days, he is going to be in contention heading into Sunday.

Rahm is ninth in total Strokes Gained. The golfer is underpriced at under $10,000 on DraftKings.

Tony Finau ($8,800)- Finau is one of the best drivers on the PGA Tour, but has also shown a propensity for nailing big puts. Finau had a difficult final round at Augusta but still finished T-5 at the Masters. Finau has three top-15 finishes so far in 2019.

Tiger Woods ($11,300)- When was the last time we saw Woods as the highest-priced golfer in DFS? There is a lot to like about Woods coming off his green jacket performance. The challenge is there is not much value with Woods thanks to his price tag. Woods is seventh in total Strokes Gained.

Woods is also going to be highly owned in tournaments, especially after his Masters win. While I like Woods to perform well at the PGA Championship, it is going to be hard for me to put him my lineups based on the above factors.

Patrick Cantlay ($8,200)- If you are looking for a sleeper to watch this week, Cantlay could be your golfer. He has finished in the top 10 in three of his last four tournaments. Cantlay finished T-9 at the Masters, T-3 for the RBC Heritage and T-6 at the WGC-Mexico Championship. He has made the cut in nine of 11 tournaments.

Webb Simpson ($7,600)- While he is not in contention every week, Simpson has a strong track record at majors. Simpson grabbed a T-5 finish at the Masters and has finished in the top 20 in his last three tournaments. Simpson is also a low-risk play as he has made the cut in 10 of his last 11 tournaments.

Here is an early look at the PGA Championship odds for the top 10 contenders, per OddsShark.

Here is a look at a great DraftKings lineup for this week’s PGA Championship. There is a lot of great value with golfers priced between $8,000 to $9,500. 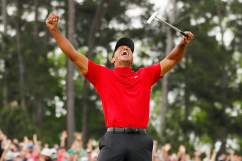