Getty Roadster is one of the top Kentucky Derby contenders.

Speedway Stable owners Peter Fluor and K.C. Weiner purchased Roadster for $525,000 at the 2017 Keeneland September yearling auction, per America’s Best Racing. Roadster’s sire is Quality Road known for his speed, and his dam is Ghost Dancing who won five races. Roadster’s name ties into his pedigree as Courier-Journal detailed.

It’s a tribute to the sire, Quality Road. “We like one-word names most of the time, and that seemed obvious,” co-owner Peter Fluor said. “Since it was available, I guess it wasn’t so obvious.”

Roadster had to have throat surgery in 2018 to repair a breathing issue. Baffert noted Roadster has shown no ill-effects from the surgery.

“Roadster is a light horse but always shown brilliance from day one,” Baffert explained to America’s Best Racing. “We’re just lucky we were able to bring him back … I couldn’t thank the surgeon that did it enough. He’s one of the best in the business.”

Roadster had been ridden by Mike Smith, but the jockey opted to saddle Omaha Beach. This meant Florent Geroux would ride Roadster at Churchill Downs, a decision Baffert stood by even after Smith was without a ride when Omaha Beach was scratched.

“I was happy, because I knew he was going to be one of the favorites,” Geroux told the Courier-Journal. “So a great opportunity. You think about it right away: ‘I have a chance to win the Derby.'”

Baffert praised Geroux’s demeanor ahead of the Kentucky Derby.

“He rides very relaxed for me,” Baffert noted to the Courier-Journal. “A lot of guys, I can use riders and sometimes they feel a little intimidated. They think they have to be on the lead, or they ride differently when they ride for me. … I’m going to trust whatever he does (on Roadster). He’s a smart guy, and he’s funny. He’s a lot of fun to be with. That’s what I love about him.”

Geroux has earned $3.6 million so far in 2019 and $84.8 million over his career. His victories include the Risen Star, Louisiana Derby and Pegasus World Cup.

Speedway Stable is the official owner of Roadster. Peter Fluor and K.C. Weiner are the owners of Speedway Stable. Fluor made a good portion of his fortune in the oil business and is part of the family that started the Fluor Corporation, per MCall.

Fluor played a big role in the discovery of Eagle Ford Shale. The duo worked together at Texas Crude Energy and now have a horse racing team.

“I’m just so happy with the way he ran,” Smith told America’s Best Racing. “His mechanics, his breathing, everything was smooth…In the Del Mar Futurity, he struggled, so they did minor surgery. Today, he was loving it.” 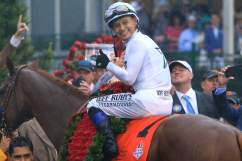 Kentucky Derby Purse 2019: How Much Prize Money Does Winner Make?