Alex Morgan and husband Servando Carrasco are one of the most well-known couples in soccer. As Alex is representing the USWNT in the World Cup, Servando is playing in the MLS for the L.A. Galaxy. Servando is hoping the U.S. makes it to another World Cup final so that he can make the trip to France to watch his wife play.

“Potentially, maybe for the World Cup final [on July 7, with the Galaxy off that weekend],” Carrasco noted to MLS Soccer. “It’s not a short flight, so I’m keeping my fingers crossed, and hopefully it works out. But I’ll be supporting from here, for sure.”

Distance is nothing new for the couple as Servando lives in California, while Alex resides at their Florida home. Part of being a pro soccer player means being ready to move, and Servando’s time with Orlando City ended in 2017. The couple has bonded over an unlikely object, USA Today crossword puzzles, as Alex detailed to the Orlando Sentinel.

“My husband has kind of gotten me hooked on USA Today crosswords,” Alex told the Orlando Sentinel. “I just kind of pick that up along the way here and there, but I’m in for any crossword, really. We have not made that a competition. A lot of things are competition in our daily lives, so I think we’ll leave that to more of a collaborative thing instead of a competitive one.”

1. Alex’s Husband, Servando, Plays for the L.A. Galaxy in the MLS

Alex is not the only athlete in the family as Servando is also a pro soccer player. Servando plays in the MLS for the L.A. Galaxy and was selected by the Seattle Sounders in the second round of the 2011 MLS draft. The Galaxy marks Servando’s fifth stop across the MLS as he previously played for Orlando City, Sporting K.C. and Houston Dynamo after starting out his career in Seattle.

Servando is described as a “technically gifted defensive midfielder with expansive passing range,” per MLS Soccer. Orlando City declined their club option on Servando’s contract for the 2018 season. The Galaxy later selected Servando in Stage 2 of the MLS Re-Entry Draft back in December of 2017.

2. The Couple Has a Cross-Country Long Distance Relationship

Prior to Orlando City declining their team option, Servando and Alex briefly shared time together in Orlando. Alex plays for the Orlando Pride in the NWSL and the couple purchased a house in the Winter Park neighborhood.

Now, the couple lives about as far away as possible while still being in the same country. Alex spoke with the Orlando Sentinel about the challenges of their long-distance relationship.

I hoped that we would continue here together, that was our plan two and half years ago. I don’t want to sugarcoat it, it’s not easy…I think we’ve spent a lot of time away from each other, so we kind of understand that side of things. Obviously, with the national team, I’m away for a couple weeks at a time, all the time. So we’ve gotten used to that.

I think what was the hardest is just us expecting to live together and to kind of share our lives together here in Orlando. Unfortunately, that didn’t happen. Just moving forward, I feel like as much as we can see each other on off weeks or whatever it is, will definitely help.

According to MLS Soccer, the couple met their freshman year of college at Cal in 2007. Servando has seen his wife’s game develop and described her as “very raw” when they first met.

“She was very raw,” Servando explained to MLS Soccer. “Clearly, she had the athletic ability. She was the fastest player on the team. She had an amazing left foot. She could strike a ball on a rope. And then she started to add things to her game, brick by brick. She got better tactically, she started watching more soccer, her first touch got better. … She’s not just a finisher now. She’s not just a person that builds her game off of her speed or off of her athleticism. She’s always looking for a challenge.”

As for living in different cities, Servando noted that it is only temporary. The couple believes they will have plenty of time to live normal lives once their soccer careers are over.

“We spent a few years in Orlando, for sure, and then for the past two years we’ve just been doing the long-distance stuff,” Servando noted to MLS Soccer. “But to be honest, this is what we’re used to. We know that once we’re done playing soccer, we’re going to be able to live a normal life, live under the same roof, but for now we’re both focused on our careers.”

GettyAlex Morgan is pictured with Servando Carrasco at their 2014 New Years Eve wedding.

Alex and Servando headed into 2015 as newlyweds as the couple got married on New Year’s Eve in Santa Barbra, California. From the photos, it looks like the couple enjoyed a beach wedding. According to People, there were 180 guests in attendance including a number of Alex’s USWNT teammates.

Servando is originally from Tijuana, Mexico and guests enjoyed a Mexican-American dinner which included a quesadilla bar along with homemade churros. The couple shared their first dance to Jack Johnson’s “Better Together,” per People.

“To be surrounded by our family and friends tonight in such a beautiful location, and on New Year s Eve to boot, has just been magical,” Alex explained to People. “We are both so happy, grateful and excited to start our lives together as Mr. and Mrs. Carrasco. I truly married my best friend.”

5. When It Comes to Soccer, Alex Admits to Being a Critic While Servando Plays More of a Supportive Role

The couple looks at soccer differently and a large part of that comes from them playing two different positions. Alex admits that she is more of the critic in the relationship.

“My husband plays more of the supporting role, and I’m more of the critiquing role,” Alex told MLS Soccer. “[He can offer insight from] just understanding the game. He sees it in a different way than I do as a forward, so it’s always good to hear from him. And playing with Zlatan [Ibrahimovic], he sees [what the Swedish star does] from behind Zlatan, so I can always learn from him.”

Servando explained that their relationship has evolved and now try to keep soccer separate by limiting their discussion of games.

“Oh, man, that’s been quite a journey,” Servando said, per MLS Soccer. “At first, we were talking about games and stuff. You know, like, ‘Oh, you should probably do this, probably do that.’ And now I think the marriage is more important. We kind of keep soccer separate.” 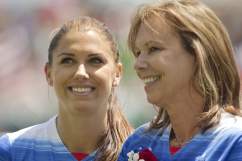