As Carson Wentz signs his new contract extension, it is hard not to think back to 2016 when he was once the favorite to land with the Dallas Cowboys. There are only two benefits of having a bad season, one is having high draft picks, and the other reason is the chance to coach in the Senior Bowl.

The latter part may seem insignificant but it gives teams a hands-on look at draft prospects with their whole coaching staff rather than just scouting the Senior Bowl as most teams do. Wentz was paired with the Cowboys coaches in Mobile giving Jason Garrett and company an opportunity to get a feel for the North Dakota State quarterback. Covering the Senior Bowl, I remember the buzz around the Cowboys and Wentz during each practice.

Jerry Jones was seen taking photo ops with Wentz during practices. Wentz looked the part of an NFL quarterback with his size and leadership abilities. There were still questions as to the level of competition he faced in college coming out of North Dakota State. After the week, Garrett spoke highly of Wentz.

“He responded very well,” Garrett told Pro Football Talk in 2016. “When he went against the guys at the Senior Bowl, I thought he fit in really well. He’s a small school guy but he’s a very impressive guy as an individual, just the way he carries himself, his leadership. He’s very impressive physically. He’s a big kid, athletic and he can throw the football. It was a good week for us to get to know him.”

As it turns out, it would be a quarterback on the opposing Senior Bowl roster that would end up being the Cowboys franchise quarterback. Jerry Jones would later tell CBS 11 that Dak Prescott was the best quarterback at the Senior Bowl “and that included a guy named Wentz.”

The Cowboys never had an opportunity to draft Wentz as the Eagles traded up to snag him with the No. 2 pick. However, if Dallas was convinced that Wentz was their man, it is more than reasonable to think the Cowboys would have traded up prior to the Eagles to ensure they got their future signal caller. Dallas held strong at No. 4 and selected Ezekiel Elliott.

Jones comments are a bit of revisionist history as the Cowboys likely would have selected Prescott prior to the fourth round if they knew what kind of NFL player he would become. Instead, the Cowboys were enamored with Memphis quarterback Paxton Lynch and tried to trade back into the first round to select him. Peter King, who was writing for Sports Illustrated at the time, detailed Jones’ regret for not upping their offer to the Seahawks to allow them to ultimately land Lynch.

It is not rare to see Jerry Jones open a vein and bleed, and emote. It is rare, though, for one of the most decisive men in the football business, a man who has made his living in oil and gas and football making hard decisions, to not pull the trigger when he thinks the trigger should be pulled. Dallas wouldn’t increase its offer to Seattle from second-round and fourth-round picks to second and third-rounders, and that’s what lost Lynch. Eighteen hours after losing Lynch, the regret was chewing on Jones.

Millions of dollars are spent by NFL teams during the draft process, but sometimes it is a little luck that becomes the most valuable thing. The Cowboys even had Connor Cook ranked above Prescott, but the Raiders ended up trading up to select the Michigan State quarterback ahead of Dallas.

Would the Cowboys Be Better With Carson Wentz Instead of Dak Prescott?

Dak Prescott was originally the Cowboys backup option in the 2016 NFL draft.

The Eagles did win a Super Bowl, but it was Nick Foles that was forced into action during the playoffs after Wentz sustained a season-ending injury. For as talented as Wentz has looked when he is on the field, his injury history is cause for concern. It is hard to argue the Cowboys would have been a better team with Wentz.

The bigger question is whether Dallas will be a better team going forward. The Cowboys are hoping Prescott can look closer to the quarterback we saw during his rookie season than some of the inconsistencies he showed last season. To Prescott’s credit, he looked like a much better quarterback after the Cowboys upgraded the wide receiver room by trading for Amari Cooper.

Sometimes it is better to be lucky than good, even in the NFL draft. If things had played out as some were expecting, Cowboys fans would be wearing Wentz jerseys instead of Prescott. Now the two are likely to be rivals in the NFC East for the next decade. 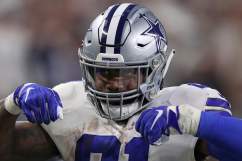 Read More
Dallas Cowboys, Football, NFL, Philadelphia Eagles
Back in 2016, many expected the Dallas Cowboys to draft Carson Wentz. Find out why Dak Prescott was the Cowboys backup option in the NFL draft.