Getty Future the Prince sitting next to Drake at Game 1 of the Raptors-Warriors NBA finals.

Drake is a staple at Raptors games, but many fans are wondering who is sitting next to the rapper at the NBA finals. It looks like the mystery has finally been solved, as USA Today identified Future the Prince as the person sitting next to Drake at Toronto games. Drake and Future the Prince may have great seats, but the DJ was almost taken out during the opening game of the finals.

In addition to being his partner at Raptors games, Future the Prince is Drake’s official DJ. Future the Prince’s real name is Adel Nur, which means justice in Arabic, per Amore Branding. The DJ calls Drake a “brother”, and the two have been connected since before the rapper was an international star.

“The pros [of working with someone you are close to] are that you have that level of respect,” Future the Prince told Amore Branding. “I love him like he’s my brother. When it’s somebody that close to you, you always look out for their best interests because you want what’s best for them so you always have that in mind. You’re always going to get honesty working with someone you’re close to because you’re never going to be afraid of telling your brother when he’s doing wrong. Honestly, to me there aren’t any cons. I call him my brother because this is a lifelong thing. It’s not just because he’s a rap superstar or because he’s Drake. That’s my friend before he’s a star and that’s my friend when he decides to sit down one day and retire. I wouldn’t have it any other way.”

After some complained about Drake’s proximity to players and coaches, the NBA reached out to Drake after the Eastern Conference Finals to discuss his actions during games. NBA commissioner Adam Silver discussed Drake’s presence at games heading into the NBA finals.

“I think Drake understands as excited as he is and as appreciative we are of his support that there’s got to be lines drawn,” Silver said, per NBA.com. “Obviously, you don’t want to end up touching a coach because a coach may not realize what’s going on in the middle of the action. I think he has a better understanding now of where that line is.”

For most games, Future the Prince can be found sitting next to Drake cheering on the Raptors. He explained his DJ name came from getting his start at a young age.

“My DJ name really came from starting in the music industry so young,” Future the Prince noted to Amore Branding. “A lot of people helped me and carried me to be where I’m at now. They always stressed on me that I was going to be the ‘future’ and they always pushed me to be the best that I can be.” 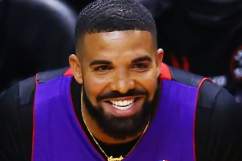