JOY Through It All!!

After finishing up his summer duties as a Philadelphia Eagles tight end, Julie Ertz’s husband, Zach Ertz, is in France cheering on his wife at the World Cup. Zach has been posting photos on Instagram from his time in France.

“Bonjour, je m’appelle Zach,” Zach posted along with a photo of himself.

“Hanging with the real LEGENDS tonight at the game!! Steve and Pete are World War Two veterans who are so inspiring it’s unbelievable!! What a night meeting them!” Zach noted on Instagram.

Hanging with the real LEGENDS tonight at the game!! Steve and Pete are World War Two veterans who are so inspiring it’s unbelievable!! What a night meeting them!

Finally, Zach showed off a photo of himself kissing Julie after another major USWNT victory.

“JOY Through It All!!” Zach said in the Instagram caption.

Zach knows what it takes to be a professional athlete. The Eagles tight end played a key role in Philly winning the Super Bowl in 2018. Zach noted that his wife could have packed it in years ago, but her competitive drive keeps her striving for more.

“If her goal was just to be a great soccer player, that goal would’ve already been accomplished,” Zach told ESPN. “She could rest on her laurels and be complacent. But she’s not.”

The Eagles tight end admits his wife’s one weakness is being a bit of a sore loser.

“Julie is a sore loser,” Zach noted to ESPN. “If I beat her at something, I try to keep it mellow because I know the repercussions if I go all out.”

The Couple Met in College & Got Married in 2017

Happy Anniversary @zachertz! Thank you for making me the happiest wife on the planet. I love everything about you sweet man! This day two years ago was the most amazing and joyous day of my life. You continuously amaze me, support me and love me. Happy 2 years ❤️❤️??

Julie and Zach met in college at a Stanford baseball game. Zach was part of Stanford’s football team, while Julie was playing soccer at nearby Santa Clara University.

The couple ended up getting married in 2017 in front of their USWNT and Eagles teammates. The wedding took place outdoors at the Bacara Resort & Spa in Santa Barbara, California, per People. Julie and Zach shared their first dance to Sam Smith’s “Latch.”

The wedding featured a few personal touches including a ring bearer wearing their jerseys and cappuccinos featuring footballs and soccer balls at the top of the foam. The couple honeymooned in Hawaii after the wedding. Julie admits that Zach knows her better than anyone else.

“Zach knows me better than anyone else in the world,” Julie explained to ESPN. “He’s that person I’m vulnerable with. We grew up together. In the soccer world, it’s really hard to root yourself.”

While the couple has bonded over being pro athletes, Zach and Julie emphasized to ESPN that their relationship is not defined by their athletic ability.

“Don’t get me wrong,” Julie clarifies. “We want to give sports everything we have. But this career isn’t something you can do forever.” 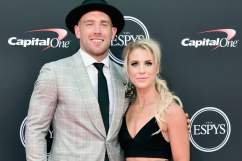